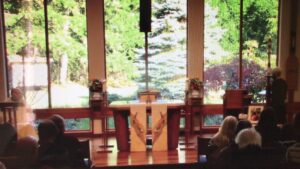 The spirit that settled in and took up residence in my parents home in the last few years was the spirit of hospitality. I am struck over and over again by the camaraderie, and the raucous laughter that fills that house, or that spills into the house from the back porch. It is remarkable and beautiful to me.

In my memory, in his earlier years dad was a more withdrawn person. I think many of us remember those times when his heart was not out on his sleeve…it is worth mentioning because it is evidence of a great transformation. I’ve tried to thank many of you for the “support” you provided to dad, and over and over again you mention his generosity of spirit, the enjoyment and deep companionship that you felt a part of. Dad was transformed by this spirit of hospitality that he found in Spain, as well as on his own camino, and home with him it traveled.

In my home, with my children, Osian and Freya, we read a lot of fairy tales. Our favorite ones have the moral, God favors the fool. The fool of course ends up a hero, and he is a person with a simple outlook. He leaves home with some idea like he is going to build a flying ship and go marry the Tzar’s daughter. He doesn’t overthink it, he doesn’t talk himself out of it because it is impractical, he just simply leaves home and sets out on his way. Of course he meets a magical old man who tells him, “here’s what you do. You take this axe, you go up to an old oak tree. You take one huge swing at the tree, and then fall back on the ground, and fall asleep. When you wake up, you will have the flying ship. The fool/hero doesn’t overthink this improbable idea, he just says “okay! I’ll do it, that sounds great!” He follows the directions exactly, and he is indeed rewarded with the flying ship.

Well, in this real life fairy tale that we are in now, It occurs to me, God favors the Phil in a similar way. It’s not a direct comparison…but I think dad also had a fairly simple outlook. Dad had a simple idea. A couple of simple ideas. He would walk the camino in Spain, and in the meantime, that he would create his own. And if this is a fairy tale, there are many magical creatures and fairy godmothers who came in, and you know who you are. But anyway, my point is the simplicity of the camino idea. It is just a path! And he did not overthink it, in the sense that did not talk himself out of it. If it had been me, I would have said “well, that was really fun to have that cool idea. If I act on it, here’s what will happen: I’ll wake up on many mornings, and it will be raining. I won’t want to walk. I’ll have so many other things to do. Or, it won’t feel like God is walking with me. The idea will lose its magic…it won’t feel like the platonic ideal, it will be corrupted by all manner of things in reality. But in this tale, God rewards the Phil who has the simple idea, and with a simple outlook says, I have this idea, and so that is what I am going to do. I’ll do my part every day. God might intervene, my doctors might intervene, but I’ll do my simple part every day.

And then, I think also in this tale, God favors the Phil who constructs a method, which he always did. It’s not overthinking exactly…but it is a thoughtful structure, a process by which to proceed. He never did anything without a method.

Every day was organized with a set of instructions on a single three by five card. I am also reminded of the “corn-o-matic,” a sort of jig that dad built to help him plant the corn last year. And here’s another example: when I was 16, dad bought me a $50 car and once it was generally in working order, he came up with a monthly maintenance plan that we would do and it would teach me about how to maintain a car.

So here’s where I here’s where we get to do an interactive activity. I want you to think: if you had to come up with a list of all the car maintenance activities one should do on a monthly basis…yes, monthly car maintenance activities…I’ll give you part of a minute…Okay tally up the number, turn to the person next to you, and tell them how many you have on your list.

Okay…so dad came up with a list that was a whole page long…I want to say there were 18 items. It included such things as checking the battery fluid. Yes, there is fluid in the battery. It was more exhaustive than a yearly inspection… But I’ll tell you, that car did live for another 15 years. So God favors the Phil who has his method and sticks to it with fidelity, day after day, month after month.

As you all know, dad certainly had a method for his camino… the calculation of the mileage, the mapping out of all of the landmarks and towns…The journal to record exactly who walked…the predictable schedule of his walking times. People knew where and when to find him. Every day, or according to the schedule, he did his part. It was simple, and methodical at the same time…it was a structure that could be built upon and that people could join in with. And you did. He was a carpenter afterall, and he knew how to build a sound structure.

It occurs to me, as much as it was completely unpredictable that my dad became a catholic pilgrim. It makes perfect sense, in retrospect, knowing him, knowing those inner traits…the stamina…fidelity, his simple delight in a plodding kind of progress. Each step was as important as the last step. He never expected any destination to be near at hand…He always expected gratification to be delayed…but he did learn to pop open a bottle of wine with you and enjoy the journey immensely.

(Ad Libbed line, after the part about the camino method: By the way, when he walked and no one was there waking with him, he would write in the journal “not alone.”)

7 thoughts on “ Eulogy for my dad  -Tesia Elani”