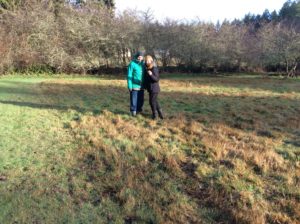 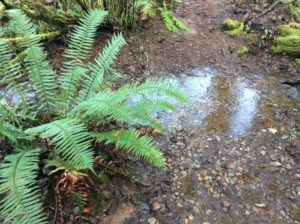 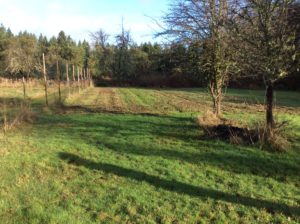 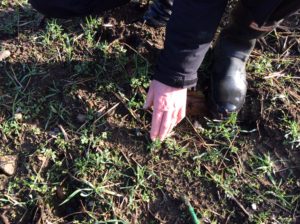 Dana showing us some of the cover crop.

Everytime I hear the word dirt, at least when it is referred to as a growth medium, I think of my time at forestry school where it was always soil and never dirt. Dirt was something dirty you know. I’m reading Hard Scrabble about the land in Texas and the author calls it dirt mostly.

Well, dirt or soil, it is one of the components of the chemistry that continually conspires to keep us alive. And here at the ranch it is what we tread on as we walk the half mile camino. That energy is pulsating under our soles (our souls), continually, whether we recognize it or not. So, subtle, yet so powerfully there.

In the book there was a section where the narrator was talking about his mother and her garden and how she saw God in the dirt:

“There were bound to have been some, he knew, who like himself knew about good dirt from seeing it in the bottoms that richer farmers owned, and on the high hillsides too steep to plow, where trees grew from it and grasses held it firm. Some even who understood that by caring and by work you could make sorry
tired old dirt over again into good, if you had time and the stuff to do it with. His mother had shown him that in the little garden she kept, red rain eaten clay in the beginning, with a little sand to it, like everything else around that farm. He watched and helped from babyhood as she hauled to it pitiful interminable buckets and barrows full of chicken and mule and milk cow poot (poop) and forest leaves and pea hulls and hog pen muck and dead dogs and snakes and poultry-plant guts and heads and feathers and anything else she could get hold of, and dug them in with a hoe and sowed year after year in the darkening loosening soil her queer Choctaw jumbles of corn and tomatoes and beans and squash and things not even in proper rows, but always lush.”
“You could own land in our head, his mother said, the way she owned that garden. They never had title to it or to anything else worth having, but they had eaten well just about always. It was God that did it, she said, God in the dirt. You fed God and He fed you.” John Graves in Hardscrabble.

Yea, there you have something. It is hard to describe how moved I am by this simple story. One simple mom in her own way with what she has at hand onlocks the universe for herself.

2 thoughts on “God In The Dirt”