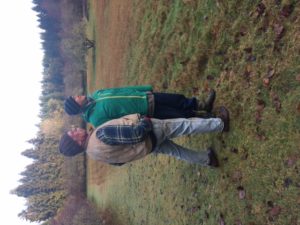 Just before Dana snapped this I whispered to Catherine, “Washington crossing the Delaware.”. We might not make very much money but we know how to have fun!

Ah, hot coffee and blogging early in the morning. It is a little oasis in the busy day that I have been about to carve out for myself. And we get to be together to “walk” and share important matters.

I can’t seem to put yesterday’s thoughts on the shelf and move on. That story about the Choctaw mother and her garden and God was just downright profound. And it was so enhanced by its total downright funkiness. It has captivated me, the story and the clarity of its vision.

If we look at the bare bones story (sorry) what do we see? She gathered up the utter refuse of the high rent world around her and offered it up. It was all castoff, death without proper burial it was. She literally gathered death in, offered it up and it was transformed into life by God in her garden.

Hope you don’t mind me sorting though the severed chicken heads and the dead dogs of it again but there is something very important going on here. I know yesterday I said something like this: that it was a simple woman that opened the universe for herself. And my thinking goes that she did in fact do that, not that she opened the whole universe but she made that first move on it. And this is the critical juncture, that she accomplished it once and saw a facet for herself. And that facet sustained her and her family.

My thinking goes that once a person is in that door, in that space, it is all up for grabs. But maybe one facet is all one needs really, yes? As you can tell I just think it is a beautiful nourishing story. I am literally nourished by this story, these few words.

It is so much akin to the story about the librarian from the ancient city of Alexandria who calculated the diameter of the earth “in his backyard”. We were hot on this story a few months back and explored it thoroughly. Cris was with us then so it must be in the last year. There I found it, August 27th, 2017 in the archives, the whole story is there for you.

Can we achieve feats like this? Yes, definitely, it is possible. Nimble creativity is a powerful tool. Love you’ll, Felipe.

« God In The Dirt
Jolt Of Clarity »