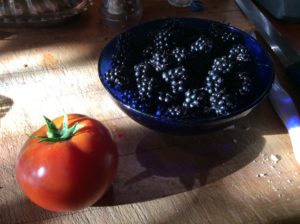 Our first tomato and a bowl of blackberries.

I salvaged this word from my daily cleaning of spam from the blog.  FUTURAMA!   That’s just what I needed, a glimpse of better things to come.  I have a few minutes before my morning walk and just wanted to report in to you.  Yesterday’s blog seemed pretty gloomy but that was accurate.  In itself it was a pretty good scan showing minor growth but we got caught up in the expectation thing, wishing and hoping for better for a reversal after two months of hard work.

Well, I should practice what I preach at this point.  The road to improvement is never a straight line or even grade, there are ups and down and even reversals along the way.  But the overall trend in upward.   That’s what I say to students in archery.  Don’t let the memory of your last arrow affect your next arrow.

Last year I walked a labyrinth for the first time.  That was at Grace Cathedral with Annie and Padre Tomas.  I had never done one because I mistakenly thought that it was a maze.  A maze has dead ends where a labyrinth has none, big difference.   You go and you go and you go on the labyrinth.   You can see your goal at the center but as you move forward on this trail you move away from the center at times.  And at other times you are moving closer.  It is not a spiral that sucks you toward a vortex but it is something far more interesting.  It shows you this way, this Camino, where there are ups and downs or ins and out but if you keep going you will get to where you want to go.

Well did we successful make lemonade out of lemons there?  Ah, five minutes till my walk.  Wiley and Hanna got a new dog and I thought I would get her to join me today for the trail walk.  OK, here I go.  Thanks for all the comments and emails.  Love, Felipe. 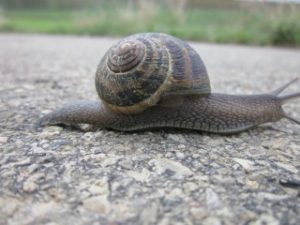 One of William’s snails. It’s how I feel today.

I don’t feel real wordy at the moment but feel a need to communicate that the scan went OK but not great.   Things showed a slight amount of growth when we were trying for some shrinkage.   We made a discision to do some more of the heavy duty chemo to see if we could knock back the tumors.

Well, all that is not too exciting and I feel exhausted just from the anxiety involved I guess.  Anyway I think I will take a pass on writing today but have a TED Talk for you that just came in an email from Padre Tomas.  It is David Whyte:

So thanks for coming.  See you tomorrow.  Love, Felipe. 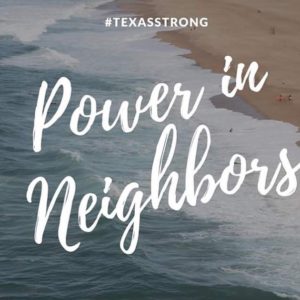 Praying for you Texans.

Off to the hospital to get the scan today.  Ah, it is the worst part of this whole deal really, psychologically speaking.  Anxiety can run rampant on you.  But we have talked about that before.

What I have really been thinking about are neighbors.  95% of the time when the topic of neighbors comes up it is in the context of some bitch; that’s a verb.  It’s about how they tend their garbage or how they trim their grass, that kind and of stuff.  With the horrendous storm down in Texas the word “neighbors” takes on a whole new meaning.   They are the ones that are going to save your butt.  That’s important.

Just as on the Camino when we learned that we can all irritate each other we are the same ones that save each other.  Right?  We need to make sure we treat our neighbors well is my point this morning, start today. 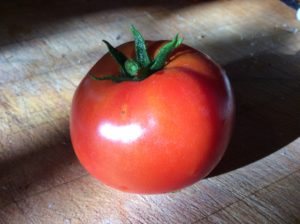 Our first ripe tomato from the plants Kelly starts. Thanks Kelly.

Annie pointed out in a comment that the story about Eratosthenes working on his calculations in his backyard was a lot like Felipe building the backyard Camino.  Yes, yes that is the point exactly.  It is the same energy, the same focus.

Do we always have to look elsewhere for our answers?  Don’t we have capabilities both through education and through native intelligence?  Isn’t it something that we used to do more often or commonly.  Somehow the big boys downtown have us mesmerized into thinking that we can’t get along without them on every little thing.

Just a line of thought that we have opened up here.  I don’t know how far it can go in the next few minutes.  Walking this morning at nine o’clock.

I used to call it as shipwreck thinking.  In other words what can we do with what we have at hand.  We are washed up on the beach and we are short on tools and materials but big on creativity, what can we do?

Really I have to go.  What a day!  The sky is blue, the corn is growing, the trail beckons.  So glad you came by.  That’s beginning to sound like Mister Rogers Neighborhood.  Anyway, love, Felipe. 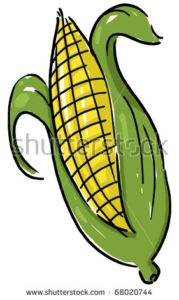 This is a visual for the August 24th post about Ray: 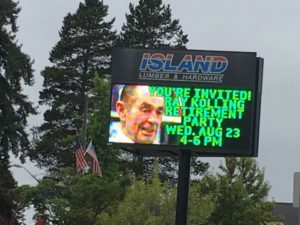 The invite for Ray’s party.

Our first tomato and a bowl of blackberries.

I hope that you all got to read that story yesterday.  Love that guy and love his story.  It is so inspiring to see how one guy on his own came up with something like that.  Obviously he wasn’t totally alone as he was plugged into the learning of his day.  But he was on his own maybe is a better way to say it.

Somehow these days we are conditioned to thinking that we have to work for some big outfit or have massive backing or have degrees hanging on the wall to make a difference.  Isn’t it inspiring to get this glimpse of one man’s thinking and his acting on that thinking.  What if more of us had this notion that there were still great things to be done and we individually could access the process.  We would have amazing potential if we realized we had amazing potential.

Just some Sunday morning thoughts.  I’m off to a going away party for my buddy Sister Joyce.  So, sad in one way.  But we will all realign and regroup and carry on.  It ‘s all Buen Camino.  Love, Felipe.

We have the ultimate second hand store here on the Island called Granny’s Attic.  One time years ago I was there and met a book entitled Mapping by Author David  Greenhood.  And I did my usual test by opening to a random page to see what was going on and what did I run into but this very story.

This very story is definitely on my top ten list along with St. Paul on the road to Damascus or Moses parting of the Red Sea.  So this guy our today’s story guy was a poet and a librarian and he figured out most elegantly an important scientific measurement way ahead of science.   One guy with a little math and a big imagination.  Are we capable of stuff like this?  Can discover things in our backyards?  You’ll like this: 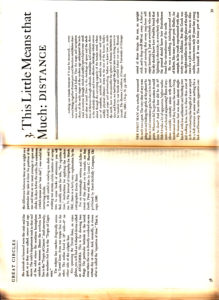 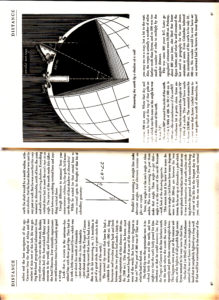 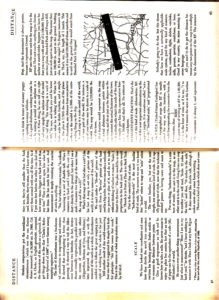 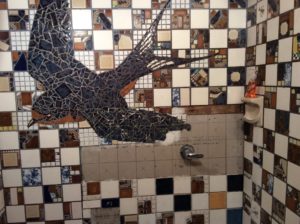 Yesterday was day ten that the roadside stand has been open and and have been selling pretty much everything.  Occasionally there are a few ears left over.  The early corn is finally hitting its stride now as the later corn looms.  But I had this idea to create a little advertising gimmick, well actually a big advertising gimmick.  I said to myself maybe I need to whittle out an eight foot tall ear of corn, all painted up fancy to put out by the stand.  Can’t miss that right?  This is life at the ranch.

The other thing I am trying to accomplish is to finish the rebuild on our shower.  Back thirty five years ago we tiled the area around the tub and creating this flying barn swallow mosaic.  Well a small area finally fell apart last year and it has been begging for attention.  So finally I am rebuilding it.  This will be a great one to get off the list.

Sorry, this all seems so minor in the grand scale of things but it is our life today.  And that’s what counts really, how we live our life today maybe in spite the grand scale of things.  Also I am excited about tomorrow and the blogpost.  I’m going to run off and have one of my Bible Guys scan a few pages of a book entitled Mapping so I can put it up on the blog tomorrow.  This is such a great story and a total inspiration for me.  Just want to share it.  So just giving you a warning, prepare, you may be inspired!

OK, time to cement in the soap dish.  Have to get it in place in the wet mortar and then prop it up with approximately thirty five sticks.  What a riot! 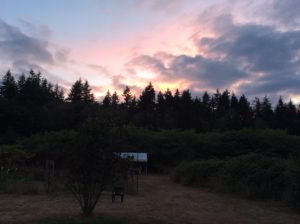 Last evening from the tapas table.

Yesterday amongst all the stuff I was trying to scratch off my to-do list I wanted to get up to town for Ray’s party.  By town I mean Vashon town not Seattle.  This was definitely a home town deal I was after.

Ray was an Army vet, school teacher kind of guy.  And somehow before you know it he had worked 38 years at the local lumber yard.  He was that guy.  And he was finally retiring and the yard was throwing him a party.  Yea so, I got up there to pay tribute to Ray the guy that kept the beat, that guy.

Now as I think about this I realize that I may be that guy for a set of  people.  There are hundreds of cancer patients that I come into contact with either directly or indirectly.  And the nurses at the hospital tell me I am on uncharted ground with my 101 chemo treatments.  Am I that guy who shows other people the way?   Am I the guy that people look to to see on how it should be done?  Could be I guess.

It sounds like a big responsibility although it isn’t rocket surgery.  Just sort of one foot in front of the other and keeping it all going forward cheerfully.  Geez that makes it sound like I march around at the hospital singing camp songs.  Well that is not the case but there is something here.

So, walking in a few minutes.  We are  having a little rain today.  Wet love, Felipe.