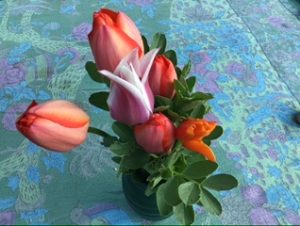 I guess the day after X would logically have to be Y, so. Yesterday started out pretty calm but turned crazy in the early afternoon. Rebecca was having some minor procedure done at the local health clinic here on Vashon and there was uncontrolled bleeding that occurred so they sent her off to the big city in the full meal deal aid car. So, she has been there over night and now it looks like things are stabilized and that she will be released soon. I am waiting for a call to run in and pick her up. So, that’s our story.

A lot of folks responded liking yesterday’s post. It was fun to be inspired by that original poem and pic for me. It is basically the way that I have survived the Cancer Camino so far. But further, yes, it has direct application for dealing with the uncertainty and displacements of the current intrusion. Yup, so take what you need and leave the rest.

I am going to sign off for now and finish packing up for the run to Seattle.