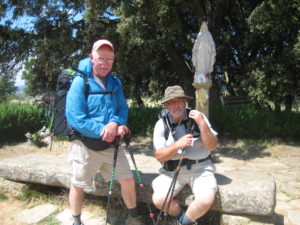 Felipe and Kelly sucking up the hospitality of the Camino.

Radical hospitality, where did I hear that phrase?  It was sometime over the weekend.  You hang around with the right people and this sort of stuff happens.  Hehe.  I keep saying it over and over to myself since I heard it.  I guess you could say it captured my imagination.

Is this what we experienced on the Camino de Santiago?  Eternal hospitality, ongoing, repeat it over and over again till you get it hospitality?  Could be, right?  At times it was funky.  Maybe things were poor?  Maybe they were overwhelmed and had been for days and weeks?  But I don’t think that you can ever say that it wasn’t heartfelt.

We as pilgrims learned lessons great and small continuously day after day.  We had an amazing experience.  But is there equal rewards or knowledge gained from being the folks that serve the pilgrims.  Is extending this radical hospitality a journey or discipline in itself.  All kinds of pilgrims train and go back to do this.  What is that like?

Maybe we could corral some of those folks and ask them.  It is an interesting twist to the story.  We have been so concentrated on the pilgrim side.  There used to be a DVD that were outtakes of Walking the Camino- Six Ways to Santiago.  We happen to have a copy of that and maybe it is still available from Lydia B Smith.  There were a lot of interviews with people along the Way.  Yes, maybe we should dig that up one of these days and play it again.  I watched it a least fifty times before I went to Spain.  I remember playing it without the sound because it was driving My Rebecca crazy.  Yea.

OK, Dana is going to be here momentarily to walk this AM.  She going to help me think about “unity”  which is the topic of a speech that I am giving May 4th.  Am trying to get that organized.  Maybe we will talk about that tomorrow.

Hey, it’s Monday,  the start of a new week.  What kind of hospitality can we cause?  See you tomorrow, love, Felipe.