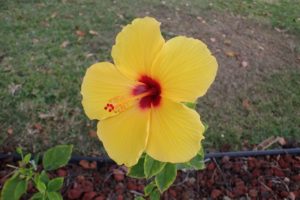 From William, from Hawaii. Thanks CBC you.

I don’t know exactly when it happened but it was at some point several years ago when my Camino experience coalesced into a single word. Sometimes that sounds weird to me, like it is a process that has to be forced. But given enough time and it happens maybe. And my word for the Camino de Santiago was “hospitality”. Maybe that should have a capital H on it.
It is that word in a great big sense.

And yesterday we had tapas after an hour long work party to get going on cleaning up the part of the trail in the woods. Charlie, Jen and Jim made it to help out. It is is open now, thanks guys. But at tapas Jim and I were talking about having cancer since his Mom has been dealing with it and he travels to see her often to help out. But I was relating something that I had been thinking about lately. And that is I have noticed that without denying that I have this disease the less attention that I pay to it the better. In other words it wants and thrives on my attention. And much more than that it wants ultimately to control everything about me as a person. It would like to control all my attention, to overwhelm all my systems.

So that word “Control” was jumping out at me. Yes, cancer wants to be the Big Controller. I see that clearly now. It is in focus for me. And this will help. The clearer I see it the better. And thank you Jim, we uncovered something valuable there at tapas.

Catherine and Dana are off to Mexico and William CBC is back from Hawaii. Friends coming and going. And we have old friend Esther coming on Thursday. We’ll be here at the ranch holding the fort for you.

Off I go for now, late winter loves, Felipé.

« I Loved Yesterday’s Blogpost
I Want To Start Worrying Cancer »