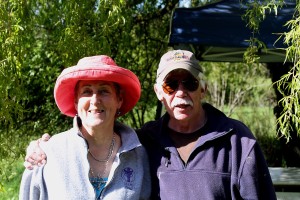 Esther and Felipe.  What a team!

Before I forget let me give you the current walking schedule for local Caminoheads to come and walk and talk here at Raven Ranch:

There, good, then a report on the Caminoheads Pie Party yesterday.  So we had our Sunday walk and talk then slid into tapas and then had about fifteen folks for potluck pie.  Everyone brought some kind of something, savory and fruit.  We had rabbit pie, elk tamale pie, Russian veggie pie, mango cream, pumpkin and all sorts of chocolate and fruit pies.  We had wine and Phil’s Pilgrim Brew coffee.  Alperfect.

The occasion was that Our Beloved Esther is off down the pilgrim road to her next destination.  This was her last weekend here on Vashon.  She has been here for three great months and this was her going away party.  We will miss her for a number of reasons but one is that she has energized the locale here for the time that we got to share her.

Such as:  the Caminoheads Make A Will Party and the Caminoheads Car Wash.  She had her hands in on those.  And the Caminoheads Pie Party was a result of her sheparding Felipe past his original idea of a pie fight party, although he still thinks that has possibilities.  So yea, you see it just won’t be the same around here.  Happy trails!  Bon voyage!  Buen Camino Esther!

Monday morning and the start of another work week, love you, Felipe.

« The Tapas Of My Life
Cancer Commando’s First Mission »

3 thoughts on “Caminoheads Events And Dates And Times”