On this solemn day of the funeral of our world’s Prince Philip we have our William remembering.

The passing of His Royal Highness, The Duke of Edinburgh, on April 9th has brought to mind many Royal memories for yours truly.

On March 24th, 1953, as a 7 year old boy, I listened on the wireless as the announcer describe the funeral procession for Queen Mary.

When the young Princess Elizabeth announced the upcoming date of her coronation of Tuesday June 2nd, 1953 I was thrilled as this date would be my 8th Birthday.

In 1957 I was chosen to be one of the representatives from my Boy Scout Troop who would attend a major exhibition at Glasgow’s Kelvin Hall. Our task was to work in a cook shelter making pancakes. Princess Margaret ( The Queens elder sister ) was in attendance. Much to my delight she came by so I was able to serve her a sample of our efforts.

July 2nd, 1965 was the day that I received my Gold Duke of Edinburgh Award from his Royal Highness.

Considering the number of youth who were present I was taken aback when the Duke came over to me.

During our conversation he mentioned that he recognized the tie I was wearing which came for an outdoor facility in Englands Lake District which I had attended.

He explained that his Son Charles had also attended there………….Small world……

56 years later I am challenged to clearly recall the rest of our conversation.

I do remember that he was genuinely interested in what I had to say.

March 19th 1966 I emigrated from Scotland to Canada.

When the the Duke of Edinburgh could not attend a presentation of his awards in 1966 in Toronto he sent Sir Edmund Hillary in his place.

I was invited to join Sir Edmond for this gathering at the then brand new Toronto City Hall.

My conversation with the late Queen Mother in the north of Scotland in 1968 is another contact with Royalty that I will not forget.

Here we stood in this old village churchyard after the morning service which I had attended with the Queen Mother and a few locals………….

The Queen Mother was so easy to converse with. 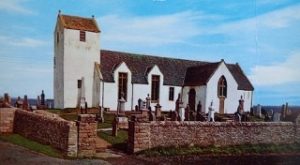 all photos from W Hayes) 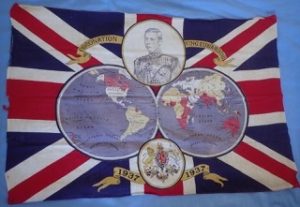 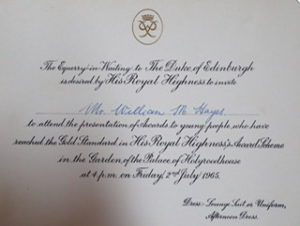 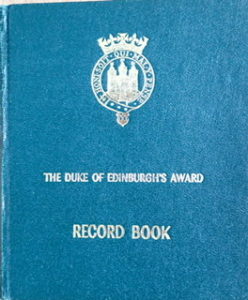 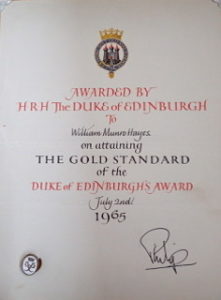 « Fessing Up
A Rock’em Sock’em Week It Was »