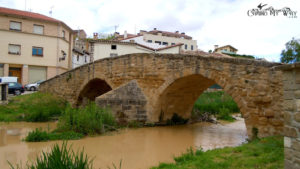 Here I am inside on the blog couch and Rho is out doing some laps before breakfast.  Seems so odd to change positions.  I am always the guy going past the window on the outdoor side.  Oh look, I think she is doing another lap.  Since I told her that her laps without me would count in the logbook for getting closer to Santiago she has been at it.

Yesterday we reached Villatuerta, Spain on Phil’s Camino.  It is approximately 40km west of Pamplona.  The pic above has the beautiful bridge over the Rio Ega.   All the old bridges were so impressive.  How many pilgrims have funneled over them since their building in what year?

Oh, there goes Rho and she has Hanna with her.  Wow,  some kind of movement going on out there.   I’m just going to hang tough on the couch.

There has been some bad news in the neighborhood.  I don’t often talk about the neighborhood here on the South end of Vashon.  There is a very talented woodworker down the road here has just gotten injured in his shop.  He and his family belong to St. John Vianney Parish.  Please pray for Marcus. 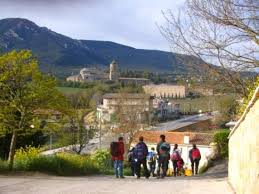 OK, that’s what it looks like today.  Rho is back making her breakfast.  Thankful loves, Felipe.

« A Friday in Lent, The Second Friday.
Phil’s Camino Collage »