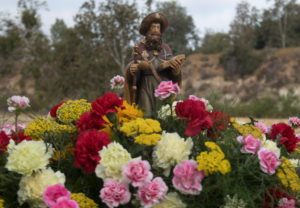 Wow,  three years ago Kelly and I were landing in Madrid.  That was the 25th and on the 26th we traveled by train to Pamplona and then bus to SJPP.  We started walking the morning of the 27th and went up and over the Pyrenees.  Wow, we did all that!

Feast of St James today, wherever you are around the world.  Can’t get away from him although I don’t know why you would want to.  So us going from here to Spain to walk was all St James.  He is the patron saint of Western Washington and Spain and pilgrims in general you see.

In the Bible he is James the Apostle, brother of John, both sons of Zebedee.  They were fishermen known as the “sons of thunder”.  It gets a little confusing because there is another apostle with the same name but he is known as James the Lesser.  Then there is the “brother”of Jesus who wrote the beautiful book of James.  He is a whole other character.

We do know the James the Apostle was the first of the Apostles to be martyred.  The story goes that his body was wisked away and he was taken the “end of the earth” which we know as the west coast of Spain.    His body was buried a long time unbothered.  Then somewhere in the 800’s it as discovered and the first church was built.  Then for 1200 years we have been tramping through the dust and mud of our beloved Spain to get near him and his energy.

We at Phil’s Camino the documentary film know him well in his role as Exective Producer.  No one worked as hard as he did to make sure that movie was made.  And now we are thankful.

Happy St James Day all you Caminoheads out there!  Love, Felipe.

« Between California and St James
We Still Have You St James »