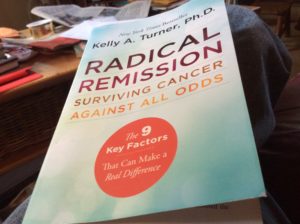 Not long ago I started reading Radical Remission subtitled Surviving Cancer Against All Odds.  It was given to me by a couple that were here walking Phil’s Camino.   I joke and say that I get two books a day by well wishers, although maybe not literally true it still feels like it sometimes.  I am such a slow reader and I don’t devote the time to it that it deserves but never the less I try and my stack is tall but I started this one.

A brief summary of the book would start with the author who is “a researcher and psychotherapist who specializes in intregative oncology”.   She spent ten years interviewing and studying people that had reversals in their cancer situations.  In other words these people somehow figured out or lucked upon cures to their maladies, improbable as that seems.  It is pretty phenomenal news when this happens and she was intrigued by it.  So, in the end she discovered nine traits that this group had in common.  Not that each had all of these but that these items kept showing up time and again.

Well, now that I have gotten this far I see that I will have to type up the list from the table of contents because I have piqued your interest:

Taking Control of Your Health

Having Strong Reasons for Living

Yea, nine, a good round number like 909 laps on Phil’s Camino equals one Camino Frances.  That is all sufficiently untidy to be real.  Anyway, I am so relating to most of these topics and it is the kind of stuff that we talk about here frequently on the blog.   As I read down this list right now I would say that six of those are very important to me already.  And maybe three I don’t understand or that I haven’t dealt with sufficiently.  And perhaps those three hold the biggest potential for me.

This is so highly personal and at the same time universal.  The book talks about the idea that the tumors are messengers.  I had thought this also although I had never cracked their code.  It is suggested that they bring the message that my life as I have been living it is out of balance.  Ahh.  Yes, I see that now although that may always be hard for the individual to grasp at first.  Like isn’t my life perfect?  Isn’t it just exactly what it is supposed to be?  Doesn’t it fit exactly the set of situations that it occurred in?

Well,  the tumors at the door of your conscience is somewhat like Genghis Khan being at your door.  He doesn’t really have to say, “ Yes, I am here to rape and kill you and yours.”   But that isn’t the end of the story, there is more to it.

Yup, as always, love you, Felipe.

8 thoughts on “Reading A New Book”