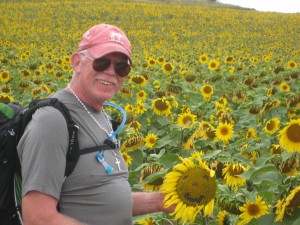 One aspect of a blog that is difficult for the new reader is getting a grip on the flow.  I can’t explain everything everyday nor can I completely run endlessly on without thought for people just coming in.  It’s a balance.  So, I thought today that I would try and run through the last two years of this blog and give an overview that might be helpful to folks joining in.  And hopefully there will be new folks checking us out as I network at the Julian Dubuque Film Festival this coming weekend.

Basically this blog boils down to the three C’s and those are Cancer, Catholicism and Camino.  If I can give you a quick paragraph on each then I think you will understand the flow and be up to speed.  These three C’s are so entangled and related that it is impossible to totally separate them, just for beginners.

So, Cancer first.  My software keeps capitalizing it and I usually try and correct that but maybe I will leave it for today.  I originally got my colon cancer diagnosis back in 2012, had surgery, had some chemo, had some rehab and then a year off.  At that point I had a 70% chance that it would not come back.  It was stage two at that point.  But it did show up in my lungs and liver and that put me in the stage four club.  So, back on chemotherapy and back to rehab.  I have two incredible doctors and their teams at Swedish Cancer Institute.  One my oncologist, Phil Gold, code name “Nugget” I say keeps me alive and my Rehabilitation Doc, David Zucker, code name “Danger Zone” I say put me on the map.   Both are vital to this story.  So, the situation at present is that there is a rough truce going on, where the tumors have disappeared from my liver but still remain in my lungs but are showing mimimal growth.  So, the threat is real but larglely potential, looming but not exactly imminent.  This is the delicate truce as it exists today.

Somewhere during this time I converted to Roman Catholicism and am totally happy with that choice.  It was my dear mother’s heritage and I join in now to it after her death.   So, I was searching for a place that was substantial and had resources to help me in my journey.   Father Marc is my wonderful local padre and I have been lucky to have Sister Joyce as my Spiritual Advisor.   And part of this mix is having our neighbor Catherine to be my Mass buddy, she is also a great Caminohead and Tailgate Teologist.

OK, we got two out of three.  So, last but not least is the Camino which is deeply  entertwined with my cancer and my faith.   For me originally I needed a way to exercise outside of the machines at the local health club.  I came across the idea of “walking across Spain” in my backyard after watching “The Way” and needing an exercise program.  This gave me a structure and it gave me flexibility in that I could walk further by the week as I got stronger or I could cut back if the chemo was bothersome.  I began to study the Camino de Santiago and that lead me to seeing the Camino documentary “Walking the Camino” by Lydia B. Smith and Annie O’Neil.  Then magically Annie and I teamed up to try and tell this whole story in film and that came true with the documentary “Phil’s Camino”.

Ah, there.  So, now the blog has been running for two years in May.  It has various periods to it that might be helpful to mention.  May 2014 through July 2014 was preSpain and full of prep for going.   Late July and August 2014 the blog came out  everyday from Spain along the dusty trail.  Then some of the best writing takes place during my reentry period which is late Aug through September and on for three or four months.   And then finally the blog as it exists today is about keeping the flame alive.  How to walk the Camino after we walk the Camino so to speak.

OK, that should do it.  I have to read Terry Hershey and Richard Rohr and then get to work.  The best to you, love, Felipe.