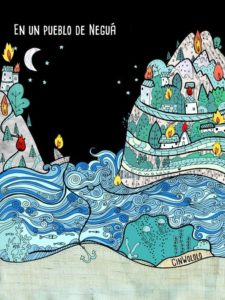 “A man from the village of Neguá, in the coast of Colombia, was able to go to Heaven. Upon returning, he spoke. He said he had contemplated the human beings from the Height. And he said we are a sea of tiny fires.

-This is what the world is- he revealed-: A lot of people, a sea of tiny fires.
Each person brights with his own light among the light of the others.

There are not two fires alike. There are big fires and small fires and fires of each colour. There are people of a calm fire, that do not even notice the wind, and there are people of a crazy fire, that fill the air with sparks. Some fires, silly fires, neither light up nor burn; but others, burn the life with so much will that they can not be looked at without blinking, and whoever gets close to them, is kindled.”

This is my own translation of a text written by Uruguayan writer Eduardo Galeano, from a wonderful book called “El Libro de los Abrazos”, something like “The Book of the Embraces”. I read this book when I was 18 and has been one of my companions since, and somehow shaped the way I see human nature.

I like to think that we are fires because of what the fire itself is: its dynamism, that can stir up or can let be put off. And in reference to this, it makes me think that beyond what the fire is per se, there is our own responsibility to keep it burning. There are no doubts that we have to take care of our own fire.

Some time ago, reading a blog* I am used to visiting, I found some words from St. Augustine along with a thought of the owner of the blog that added a bit more of  food for thought:

“-“Because there are some who call themselves simple but they are lazy; … they call themselves docile, but are apathetic” (St. Augustine, idem)-. If our simplicity, our docility, our kindness and our tolerance are not compatible with a heart that is passionate by good and truth, then it is not tolerance but apathy, indifference and “flippancy”.”

I cannot avoid thinking about the attentiveness we were talking about yesterday (and Catherine so beautifully added on! Go to the comments!!!) How easily we can just “slip in” and let our lives “go by”, speaking in fires, becoming a “silly fire that neither stir up nor burn”. I wish to burn my life with eagerness, because the best thing of being such a fire is that its warmth exceeds ourselves, it is offered freely to those who are close and to those that being far away want to get closer to warm up… it is as if in this “giving without giving”, offering without even noticing, that our real human nature is hidden.