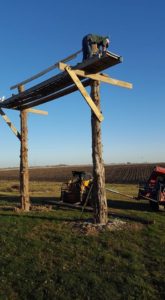 Pilgrim Farmer John and his giant swing, kind of a quixotic deal.

Maybe it is nimbleness, maybe it appears slightly naive, maybe a certain knowingness, sort of a bit of happy go lucky. Just trying to figure out what all pilgrims have in common, well when they are in the zone anyway. I have Catherine y Dana for archery lessons this afternoon and I am always sheparding them into the archery zone. There is a place to be that gives you a bulls eye.

And as a pilgrim there is a place to be that gives you the Way, the learning of how to be on that different plane. Kind of feel like I am walking around in circles. Perhaps I can try again. In order to get the big lesson one must be open to it which means a certain amount of trust in the process. One must say yes I am ready to be the clay to be moulded.

I have met people who have been on the Camino and said that they just didn’t get it. Yea, I can see that happening. There is a difference between a traveler and a pilgrim. And being a pilgrim is being on the quest to get “it”. You know there is an “it” and you work toward that. And you have to have the trust that if I am the clay good things will happen as the kilometers go by, as the church bells ring, as the snorers snore, as your pack gets lighter, as you get lighter.

There it is again, the lightness. Well, perhaps I can tackle this on another day, got a start anyway. I like the part about being in the zone gives you a bullseye. OK.

Started Don Quixote the book yesterday. Well, I am fighting my way through two introductions anyway to finally hopefully get to the “greatest novel ever written” here soon. Trying to catch up on my classics is one reason for reading it but also because my “battle” against cancer has been described as “quixotic” and I want to know what that means.

Yup, that’s it for today. Get in that love zone and get a bullseye, Felipe.x

4 thoughts on “A Certain Lightness”