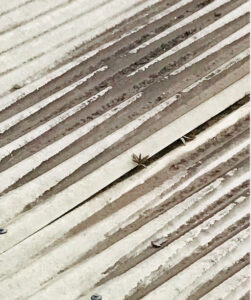 A tiny plant thriving in the dirt accumulated in the roof of the parking lot at. Pict by Cris.

Beauty, with capital B, is a word that has both interested, and at times, hunted me for years. The morning before The Veranda 2019 was about to start, Phil and I sitting were sitting at the table in the ranch having a cup of coffee and we talked about the quest that the writer John O’Donohue had started, which was “How to ask beautiful questions in <un>beautiful moments?”… Today I thought of this and this post below that Phil wrote as I looked at the piece of roof that remained in the parking of the building I live.

When I described our project to Our Michele, a knowledgeable horticulturalist,  she said, “Yea, Guerilla Gardening!”.   Well yea, something like that I suppose.   We have been working at it a month now since things are warming up around here.

A brief description would be that we discovered some viable patches of soil that need some love.  They exist where thousands of people would see them every day if only they had a little color to show off.  Right now they look like accidental piles of dirt that have built up over the years because of road dirt, bird poop and whatever has tended to collect due to natural forces.  And the area is so busy with traffic that it would be a huge hassle to close the road to clean up these untidy little piles so there they live sort of invisible.   We thought that there were three out of many that looked large enough to support flowers over the summer season.

This looks like a caper for Cancer Commandos if ever there was one.   Our Michele suggested Calendula since it is colorful and easy.  I added California Poppy because they are colorful and thrive on neglect.   So this is the blend.  So how do we actually get the seed in the “soil”?   We thought up this plan of mixing the seeds in water in a standard paper coffee cup like from Starbucks which are everywhere and attract zero attention.   Then since our hopefully fertile piles exist so close to the car window and since most time the traffic slows us down to walking pace we thought that casually pitching the cup of liquid on a strategic area as we roll by would look like we were jettisoning some cold coffee.

February 19th I did the first cup and yesterday I did the last of six.  And the piles are sort  of rough with a lot of crevices so sowing with lots of seeds with no raking in should mean that we could expect maybe a 10% germination.    That would work to bring some color to lots of folks from an unexpected place.   Well, we have our fingers crossed.

So geographically this area is where the West Seattle Freeway enters I5 North and there is a ramp that curves down and to the left.   There is a sign to Vancouver overhead  and the three piles are the largest ones around that sign.    So I got Wiley interested in the project and he could probably get all his friends to help water it over the dry of late summer.   What family fun!

Yesterday while I was conversing with one of my lovely nurses this project came up.   I am with these folks in the chemo treatment area for four hours so almost any new topic is appreciated  and explored.  I thought that this was a good one to mention.   So I’m describing the situation like I just did for you and she was listening and forming a pic in her mind.   And the dear came up with this great question that was a high point in my day.   She said, “Well, how do you know that no one will come along and clean those up and destroy your project?”.   Actually I had been thinking of this so the answer came quickly.   “That is the beauty of it!  It is a metaphor for our lives here with our cancer, right?  Get it?  We don’t know when we will be swept up from the living.   But that  shouldn’t stop us from planting something for the future.”    Yea, nice interchange.

Off to walk this AM.  Thursday morning is beautiful here with the rising barometer, rising love, Felipe.

One thought on ““Yea, Guerilla Gardening!””