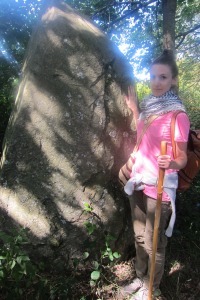 Maryka with an artifact from an earlier time that we found next to an airport runway.

I had the great pleasure to be with my Vashon buddy Rick (Quick) and his lovely daughter Maryka for the last part of my Camino de Santiago pilgrimage.  Having her there was a totally suprise to me although apparently everyone was in on it.  Anyway I got to spend a lot of time with her just doing what we seem to do best, walking and talking.  And it was just a continuation of our walking and talking that we did in the rain and the snow during the winter here on Vashon.

Have to interject something here from our good friend and serious Angel, Laura from Barcelona.  She emailed yesterday and reminded me/us to have Patience.  And she called for capitalizaton on that since she thought that it was so important.  I trust Laura on this so I am going with it.  And since I was having one of those mornings when I had no idea what I was going to blog about, she also provided me with that.  Thanks Laura.

Patiece, yes.  And this is my remembrance:  We were up early, from I think the monastery at Samos, and it was dark and foggy.  We were walking mostly along the shoulder of a paved road with some occasional traffic.  It was a little hairy since the footing was questionable and with the real possibility that we would miss a sign and be headed off in the wrong direction.  Rick was ahead or behind on some scouting mission.  Anyway, Maryka and I got on the topic of Patience.  Don’t remember how it started but we were throwing our best most inspired thoughts into the mix of our conversation as we felt our way along in the fog.

I remember talking about us Americans being so impatient, being a spray can society.  If we can’t do it quickly and easily and just by pushing a button we are not interested.    The conversation went on and I was talking about how we would  put our money in the Coke machine and if things were too slow or non functional we would start kicking it, like that was going to do some good.  And no sooner did that come out of my mouth than in the distance we spied this weird red glow.  And as we got closer it grew in size until we recognized it as a, guess what, a Coke machine.  No joke just there with nothing else around it and with an extension cord running off into the fog.  It was the first one that I saw that had the Cathedral at Santigo image on the front.  We just stood and stared at it.  Message, you think?!?

2 thoughts on “A Remberance Concerning Maryka.”