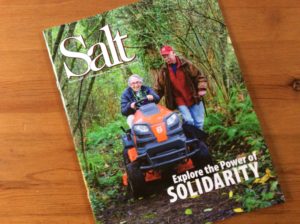 Sister JOYce and I tearing up the trail on the cover of Salt.

Today is a BIG DAY for this blog, a JOYFUL DAY. I saw Catalina’s facebook that Phil’s blog Book, the book created by the curated posts that Phil wrote done by Catalina, has gone today to the printers! This is such an event, a truly JOYFUL one for all of us who love Phil, Rebecca and Catalina, and where touched by Phil’s words over the years (or months, or days, quantity doesn’t matter, quality is the goodie).

What is interesting is that when yesterday I asked you to read Ron’s words and stay tuned for today’s post, that was going to be by Phil, it was because I had in mind a post Phil wrote on 24Sep2014 that touched me super deeply and I only read when I did the reading of the book as “reviewer”. Having had that in mind yesterday, finding this news of the book today, and the fact that the post is about JOY, I cannot help but picturing Phil in the tapas table he already built “up there”, with a glass of red wine in hand, and looking at us over his glasses with a witty look… You know what I am talking about… !!!

So, time for me to leave you with what is important: Phil’s post is below. The discussion continues tomorrow.

JOYce is also the name of his friend, Loves,

Little gifts are coming at me. I am doing my best to catch them and to examine them and be thankful for each. These are realizations resulting from seeing my surroundings, physical and otherwise, from new viewpoints, new perspectives, I think.

Remember when we were walking and we were in the middle of nowhere, and we were in that stage between pain earlier and tiredness later. That’s right, the giddy stage. We had mastered pain for the time being and we still had plenty of energy left to walk and learn about each other. We talked and we had time and we explored each other. Is that sounding too weird to say? Somehow in that process I was not only hearing your story but magically I became your story. And maybe you became my story, I don’t know for sure. I was seeing things through your eyes is maybe a more conventional way to say it but it was stronger than that. It was more than an intellectual understanding. And maybe when one does this with enough people you just get the ability to lose yourself which I think is what I am experiencing now.

And this is part of being a Caminohead, don’t you think? And maybe part of the reason I think so much of you. SJA, Phil.

One thought on “Many shades of Joy”