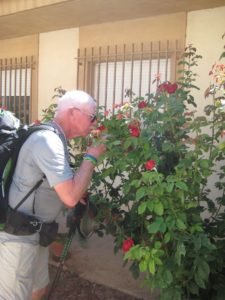 Time to smell the roses!

I am taking the freedom here to post the comment that Steve-O posted for us in yesterday’s post… such a good food for the thought. And it is very well in sync with the topics we have been talking about resulting from the Tower of Babel thing, I believe…

We all have in common our human nature, and then, some of us are luckier than others with the families, societies, cultures, economy, politics, nature, environment, etc., that we are born and or immersed in and in most of the cases, we don’t have a choice over them. But, there is a third layer that is attention, that is the way we interact with the internal world that comes with being human and the environment (this external world). The result of what we do with all of that makes the “life story” we live and in every aspect: each of us walked the same Camino de Santiago, and while that part of the experience is shared, the way we lived that experience is unique for each of us. Diseases are born under this same structure, and the prognosis they have also!

Phil found his unique way to live his life story, pay attention, smelling the roses often, having a routine, reading lots… And we have been lucky for having with Phil in our environments and being influenced, shaped as the rocks in the tumbler – becoming MWE-, transformed by this fact too.

Enough of me! Time for Steve-O’ s comment (Thank You Steve-O!!!)

Human loves (THAT. That. Matters),

That’s really perfect, Cris. Serendipity happens, and to those who look it becomes, like all miraculous things, more common, more visible, right?
Maybe I should write more ‘comments’ about my last two nights with Phil. Yup, in the Elk Hotel where we’d spent a good amount of time in MON * over the years. We talked two ways on two nights. And there was a coherence to the two conversations –though to all appearances and sounds and words and pace and syntax and content they appeared nothing alike. But…
They Were.
I am cautious about making Phil an icon or figurehad or one whom around which could develop a cultish honoring, a cultish adoration, and therefore a dehumanization the man. He was not a saint. He was a guy, a guy open about his transformational experience and it’s subsequent outworking.
Figuring It Out Together.
We. He said WE, and it was new to me. A new idea, a new meshing of words I’d not heard together, a new concept, a new understanding, and a transformational experience for me.
Collaboration in all things, with all people, about all we seek to understand, or that the Other seeks to understand even more than we might, but
WE figure it out.

THAT.
That. Matters.
That is at the core.
That is a Thing, and a rare thing in its open hearted, earnest, unadorned, unquestioned, even innocent authenticity.

That imperfect, aware of his flawed humanness, willing to open up with another, explore together guy –that guy that was my friend; that was Phil.
Just like all of us, I think. But Phil was generally payin way more attention– in the big picture and in the moment.

« 4 years ago… “Pilgrims all over”
A prayer for us pilgrims »

2 thoughts on “Humanizing the man”