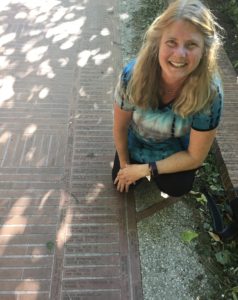 In the green heart of Italy within the province of Umbria, La Città Mistica-The Mystical City stands tall, majestically perched upon the western flank of Mount Subasio. Assisi, a small medieval town surrounded by ancient stone walls and 8 gates, both which protected the town’s inhabitants many years ago. Looking up from the Spoleto valley below, the town appears bookend between St. Clare’s Basilica made of horizontal bands of white and pink stone standing towards the east, and St. Francis Basilica a whitish, bi-level basilica looming towards the lower west end.

Inside these reinforced walls, cobblestone roads, which carry the echoes of footsteps both past and present, wind their way through the maze of merchant’s shops, street side cafes, and open spaced piazzas. It is in the main piazza, the Piazza del Comune, where you can find the people gathering. Serenading with the sounds of falling water, the Fontana dei Tre Leoni (fountain of the three lions) circular in shape is near the east end. It is here in the mornings, as the sun peeks over the top of Mount Subasio, the townsfolk share their plans for the day while the aroma of cappuccino wafts up from their warm cups. In the evening they pass through here slowly, perhaps on their way to cena (dinner) or to take a seat upon one of the benches lining the piazza which are shadowed by the walls multi story buildings on both sides. If you were to take your place there upon the wooden seats or on the ancient stone steps of the Temple of Minerva, it would not be uncommon to see a robed Franciscan Priest or women adorned in the simple habit of the Poor Clare’s briskly walk by.

As a traveler I do not know which called out to me first, the spirit of St. Francis or the essence of Assisi. Perhaps the two cannot be separated. It was in 2005 when I first introduced myself to the hometown of Sts Francis and Clare. It was a proper introduction with polite curiosity. Upon my arrival, and while partaking of some fresh roasted chestnuts near the Fontana dei Tre Leoni, the day seemed innocent enough. Yet at times now I have wondered if it was then when the gentle flame first sparked. If so, I did not know. It was not until a return visit in 2011 while I was resting among one of the tower ruins of the Rocca Maggiore, an abandoned fortress which stands guard over the city high upon the hilltop, that an Assisi breeze whispered an invitation. My soul responded and my pilgrim’s heart was opened. Since then I have had the privilege of participating in two pilgrimages centered on the lives of St. Francis and St. Clare in and around the mystical city. One in 2015 and the other in 2018.

On Monday of this week, Phil shared with us that on May 5 he will shift the virtual location of his pilgrimage route on Vashon from Spain to Italy. My heart leapt at this news learning he will begin in Assisi, my beloved medieval, Umbrian town. Assisi, also known as the City of Peace, is a worthy place to begin or end a pilgrimage, especially with one we are all so fond of on Vashon Island.