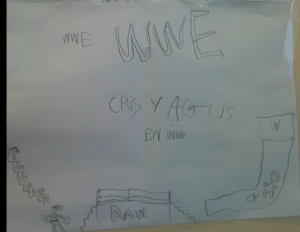 Cris and Agus in WWE (by Agus)

Oh boy, the boss is a hard bone, isn’t he? He was prescribed a day off but he couldn’t help and sat back in the red sofa to blog for us… I am definitely not telling his chiropractor, and I am crossing my fingers he didn’t come to check the blog and found that his patient has misbehaved!!! So anyway, you will have to put up with me again today, as I will blog on the boss behalf.

I loved Phil’s description about working with Wiley, and I thought about a funny story that I had with my youngest nephew, when he was around 5 years old (now he is 10). For him, I had always been “Tia Cris” (Auntie Cris). You see, my brother only has one sister (me), and we no longer have parents; and my sister in law’s family lives in another province, so the only one around most of the time for them in those years was me.

That year, on Tuesdays my oldest nephew used to go to his first Communion classes, and it was a family thing, so his parents were going along. So, it was my turn to pick up the youngest from kindergarten, bring him to my house, and bake cookies or muffins, as we waited for his brother and parents.

This particular afternoon, I picked him from kinder, and as we were walking to my house, he was saying good-bye to each of his friends and was telling me the name and last name of each, as he greeted them. I then asked him if he knew his name, and he loudly said his name and last name, and I asked about his brother’s, and he also said it correctly, and continued to tell me his mother’s maiden name and his father’s name and last name. Then is when I decided to ask him if he knew my name, to which he replied: “YES! AUNTIE CRIS!”, to what I said that it was not, and when I said my name, he opened his eyes widely, looked at me in awe, and exclaimed: “Why do you have the same last name I have?”, so I explained to him that his father and I were siblings, and went on to explain to him that that was the reason why I was his “auntie”… he was puzzled, he was as if a new world had opened in front of him…

We arrived home, baked cookies more silently than ever, and then his brother arrived. He rushed to the door with excitment and the first thing he said his brother -who was 8- was: “You know what? Auntie Cris is daddy’s sister!!!”, as if he had this big news he wanted to share. But instead, his brother shrugged and said: “Yes, that is why she is Auntie Cris”. You could not imagine his face… he was shocked… and as he was looking at each of us, the adults in the room, exclaimed: “And why didn’t any of you tell me?!”

That was a big lesson to me… how many times do we take for granted that the other knows some very basic things, and we live years in that way, until we realize it is not the case? For quite a while, after this funny event happened, I paid attention to this question and realized how many things I just “assume” everyone else knows… and in consequence, I realized how many misunderstandings come from those “assumptions”… As I write about this today, I think I will start contemplating this topic again… I am foreseeing there will be a number of conversations I will have to have…

« Sunday Morning, Getting Past The Danish
Busy Tuesday »