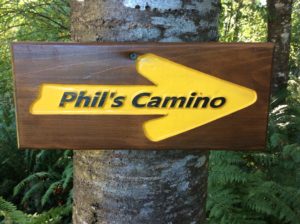 You have come to the right place!

Sometimes I look at this blog and I wonder.  It has been over three years now that we have been meeting daily.  I have been writing day after day all this entire time.  It was supposed to be a way to communicate with folks when I went and walked in Spain.  It was a broadcast everyday from along the trail.  And now what, thirteen hundred posts and three years later?  What are we doing?

After coming back from Spain this whole endeavor began to be fueled by the notion, “When you get to Santiago your Camino begins.”  I now take that to mean, yes, you have been trained and now what are you going to do with it?    Or perhaps, you are still walking, can you feel it?  Anyway, it has been a place to talk about this phenomenon and more exactly what my personal walk looks like.

In my Bible Guys class we are reading the Acts of the Apostles.  And that whole book was written by Luke as a view into the walk of St. Paul and his fellow travelers as they rough and tumbled their way around the eastern Mediterranean spreading the news about the Gospel.  Interestingly enough we do know that before the word “Christian” those who followed Christ were called people of “the Way”.

What are you getting at Felipe?  Well, I think there is still value in this sort of journaling that we have been up to but also I am starting to see something new emerging.  This is with the help of Cris from Buenos Aires.  She is grateful that we provide space where the Camino “exists”.  It is a place where we talk about it is such a way that it is here and now.  It doesn’t exist just in Spain or just on the way to Rome or Jerusalem.  It doesn’t exist three years ago but now in the here and now.

One of my Angels that I walked with in the early part of my trek across Spain was Laura from Barcelona.  She runs a place there that provides a space for performing arts.  The name of the storefront is translated Island in the Sky.  It is a space, a chance, an inspiration, an acknowledgement,  an environment for growth.  This is what I see anyway.  Maybe it is more than that but you get the general idea.  That is what I am seeing the Caminoheads blog now with the help of Chris looking at us from thousands of miles away.  It is serving that purpose for her there where apparently fellow pilgrims are few and far between.

Well, that is certainly something to think about and be conscious of and to build on.  That seems worthy of the “ink” and the time that it takes to write all this.  Must go for now, Buen Camino!  Felipe.x

« So Many Nice Comments
A Sunday »

2 thoughts on “What Are We Doing Here!”