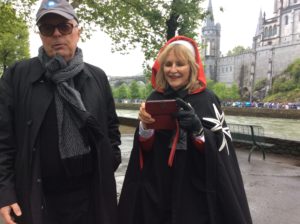 Padre Tomas and Cheryl a Dame of Malta. They are handling Felipe. 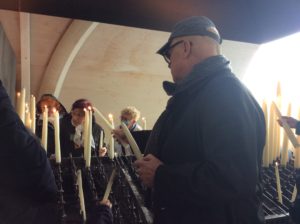 The Padre lighting a candle for me.

OK, am writing this post in the evening to describe today before we are off for more stuff in the morning.  We were in the Immaculate Conception Basilica this morning for foot washing.  Padre washed and kissed my feet.  I don’t know what to say but it was very moving.  We got a rosary there and did Confession.  I just did Confession at home but figured I needed the practice.  Father Jordan, a Dominican priest was helpful with a fumbling Felipe.  Then we returned to the hotel for lunch and to warm up.

In the afternoon we did the famous dunk.  That was breathtakingly cold water.  I prayed for all the malades that were too sick to make the trip as I went under.  Coming out there are no towels, just get dressed and get marching.  But it feels good to have that water all over you and be moving.

After that at the we entered the Rosary Basilica with maybe two thousand other pilgrims.  It was all the people that had come from the US.  It was a Mass with seven bishops and dozens of priests celebrating.  It was a big show.  I had dinner with one of the bishops last night, hobknobing.

It is raining and will be for a while.  They are expecting the river to start flooding the lowlands.  That doesn’t look like the little stream that  Bernadette crossed in the film “Song of Bernadette”.   There is a lot of water right now looking for the fastest way downhill.

Tomorrow more big stuff and it is topped off with the nighttime candlelight procession.  Will be back to give you the exciting details.  Time for me to get out of the bar and off for some sleep.  Still trying to catch up.

« With The Knights And Dames
The Western Association »