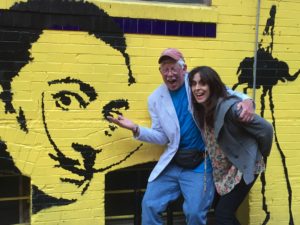 Adventure Is Out There!

Annie and I were on the phone on the 18th of February and she reminded me that that was the date I had sent my first letter to her three years ago asking whether she could come and walk with me.  I had just gotten to San Juan de Ortega on Phil’s Camino, about a third of the way across.  And it seemed like a few hours afterward that she wrote back, “How about March 2nd?”.

Here is the notation in the logbook in Annie’s writing for March 2nd: Buen Camino (Heart Symbol) Annie O’Neil.    Yea, it was raining like a son of a gun that day.  The day before was nice and the day after was nice but the 2nd was a downpour.  But we walked and talked and hit it off.  And really that was the start of  our whole relationship and the whole film project.  It just wasn’t going to happen without Annie but we all didn’t know that yet.  We were still walking in the mud, a phrase I am fond of.

That was three years ago and a whole lot has happened since.  I have to mention that Saint James is the Executive Producer of this whole shebang because really we didn’t do it on our own.  So much fell together as if by magic.  In the end it is all good and we are all the richer for it.  But surely it couldn’t have been done without Annie.  Thank you so so much and Happy Anniversary.  Love is squishing out all over, Don Felipe de Viana.

« Getting Close
Thank You For Living So Loudly. »

6 thoughts on “Thinking Of Annie O’Neil”