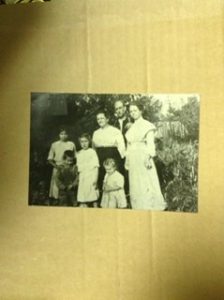 The littlest girl in this old photo is Ruby Brink. There is a restaurant named after her on the Island.
(photo from Sue Hoffman)

Today’s phase is waning crescent with 35% illumination. I saw it through a thin spot in the overcast sky earlier this morning. Yup. the left side is lit.

Henriette came down to the Institute on Wednesday to gab. We went over to a coffee and donut place for a snack. We were thrilled that the lady ahead of us in line paid for our stuff. So we paid for the gal behind us. That was fun! First time I was involved with one of those deals. Anyway, I don’t know what led into her talking about the moon. Her point was that she didn’t or couldn’t pay much attention to it. What was all that waxing and waning? That kind of stuck with me.

Our lives are largely of the indoor variety these days and we loose track of natural phenomena. If we were more creatures of the outdoors all this would be important and noticed constantly. And remember we have learned that noticing is an important practice? We are missing something important not being in touch. We are swamped with data every second but we don’t know the phase of the moon seems odd to me all of a sudden.

So, I thought maybe this moon knowledge could be included in the blog everyday as a nod to the natural world. You know I still remember the phase of the moon when we were in Viana, Spain in 2014. It was first quarter. This was the day I was knighted by the Princess of Viana.

OK, off to say my rosary and run up to church for Communion.

« In The Middle
This One Hummingbird »

8 thoughts on “Thinking About The Moon”