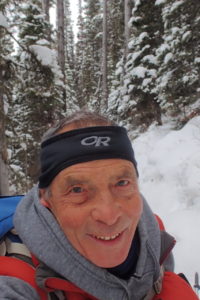 I really don’t know how cold it would have to be for your brand of whiskey to freeze but I got your attention anyway but that would be pretty damn cold. Well, Wiley’s callsign is Whiskey and he froze a few nights so that counts pretty much. I am back for a mid week break from the Elk Hotel so I thought that I would hammer out a communique to you guys. As of the time I left we saw recent tracks but no critters actually standing in any. But having a good time playing the game.

There is snow there where we are camped and deeper stuff higher up to tromp around in. The high point in the neighborhood is 5900 feet above sea level with the tent at 5000. And snow is much easier to deal with than rain so happy about that.

It has been down in the teens at night, temperature wise. We have the fly on the tent for extra insulation and the Lil Buddy propane heater runs all night on low setting. And we have the propane cook stove that we had at the Veranda going. I’m pretty much the cook leaving the climbing around to the young bucks. The guys aren’t complaining too badly about the food so I guess I have future employment.

One morning out there after I got the guys off I spent a good hour standing in the first sunshine thawing out. Something so simple can be such a joy. And there is a young cottonwood tree that was basking also. Half of it’s leaves had already fallen of over previous days. Then as I watched the tree warm, leaves started falling in a rush. That continued for half an hour maybe at the rate of ten per minute and then it stopped. It was entertaining me as I tried to guess which one would fall next. I guess I am easily pleased and it was fun while it lasted.

So, I have the afternoon here to gather up things that the guys requested and fix a few things and round up more water and propane. And I’ll be off early tomorrow morning. Going to stop at Jessika’s on the way and delivery some of her stuff that needed hauling. And I want to stop at Cabela’s, the mecca of outdoor stores for a few things.

Well, thanks for checking in here at Caminoheads. I will be back On the air Sunday or Monday. Happy Marine Corps Birthday today for anyone who might be a Marine out there.

« Ron In Astorga And A Day Early
Ryck CEBC, Fresh In From Washington DC »

2 thoughts on “The Night The Whiskey Froze”