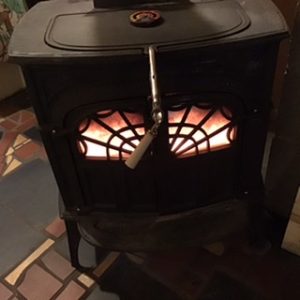 Isley all fired up this morning.
(photo P Volker)

I am listening to the fire in the woodstove crackling as I settle in to write. Our first morning fire. It’s like an old friend that I haven’t seen or heard from for half the year. October is here in all it’s fog and glory. I think I might be hearing a foghorn but it may just be the tricksters in my head.

October means football and we have a Seahawks game starting at 10AM. Before that Catherine will be here to walk and pray and we will go off to church for Communion. Sort of a prayerful football morning.

I finally got to my Bible Guys Zoom yesterday after missing it for two weeks. Have been going so long that not going leaves a blank space in my personal week. Yea, and we are working on the long list of miracles and we did the fish with a coin in it’s mouth. It is a very private miracle just involving Jesus and Peter and is a demonstration for Peter of keeping up with responsibilities in life and the province of God. To tell you the truth I don’t know if I ever heard of it before as it is not of the big hoopla kinds of miracles like the feeding of the four thousand or five thousand.

Anyway, Peter needed some extra training apparently so he was singled out for this lesson. But that is good as he will play a major role in the early church. Such a major player that we Catholics think of him as the first Pope.

I guess I needed some extra training also, that why I was visited by my friend Cancer. Not that I am causing any major waves in the world but perhaps I am lucky enough to be of some help. Somehow this morning as I did chores and hunted around for breakfast I was thinking about my lazy approach to my Bible Study. I have been thrown in with guys that really really hit the books. I seem lazy and haphazard in comparison. Somehow that seems to fit me but a somewhat rumpled fit it is.

We all approach God differently as our personalities dictate. No one right way as there is no one right Camino. Oh, I feel better now. I guess I was comparing myself too much with the serious students. They do let me hang around and they give me somewhat of a pass thinking all that heat and wind of pilgrimage has somehow altered me from the norm.

2 thoughts on “The Lazy and Ambivalent Bible Scholar”