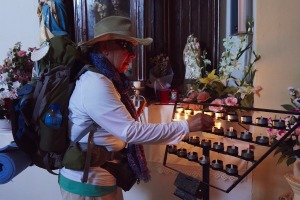 To: Phil Volker <caminoheads@icloud.com>
Subject: A Friday tale
As we were leaving Castrojeriz at about 7 a.m. on a Monday morning, facing the very steep mountain path ahead, I told my companions to go ahead because I wanted to pop into the large church we were passing in order to ask for extra strength. Alas, as so often in the smaller towns, the church was locked until noon Mass. I remarked with irony that despite my motivation for the Camino being religious, I was feeling quite spiritually ‘dry’ as we had also arrived too late for Sunday Mass the day before. Shoot, I said, I spend more time in church back home in Long Beach than I have here on the Camino!

Trudging along, up and up, sweating and breathless, everyone passing me, I finally reached the top and took the requisite selfies. Companions long gone, I started down the dusty descent alone and suddenly spotted…a monk ahead of me! Was it a mirage? I sped up and greeted him with ‘Buen Camino’ and he smiled and replied but said he was Polski and we discovered that my Polish and Russian were inadequate and he didn’t know any English, French, German or Hungarian so we couldn’t communicate.

He was pulling his backpack in a little cart behind him and indicated that his feet (in worn leather street shoes) were in very bad shape so he couldn’t wear it on his back. I wanted to help him or at least distract him, so I remembered a Polish Christmas carol that I sang every year in a concert at the Abbey Liguge in France. I sang Mizerna Cicha – he grinned ear to ear and sang along and our steps were much lighter as we realized how funny it was to be singing a Christmas song in August in Spain.

We soon reached the lovely Hospital San Nicolas and stopped to rest with dozens of others. Among them was a Polish man who spoke English and had a conversation with my monk. The man came to me and said, ‘Mary, Brother Angelo says to tell you ‘Different tongues, same heart.’’ Then Brother Angelo came up, gripped my head and blessed me in nomine Patris et Filii et Spiritus Sancti.

Mary Margaret
“My only regret in life is that I did not drink more Champagne.” last words of John Maynard Keynes, English economist

One thought on “TGIF/Mary Margaret#1”