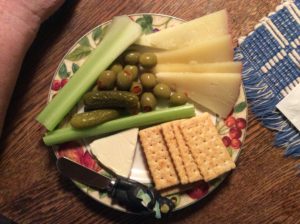 Our tapas, just because we can.

It was a gray chilly afternoon walk yesterday here at Phil’s Camino. No one was here to walk with. It was one of those wintertime occasions when “we” try not to see it as a chore but that is challenging. But this trail has a sort of energy because as Steve our NWBC says “we never close”. In other words we are always continuing or always wpresent.

I went around my usual three times to equal somewhere around a mile and three quarters total. The first time I put out two pounds of sunflower seeds for the birdies. The second time I prayed the rosary which on Sundays concentrates on the Glorious Mysteries. That’s a good thing. Then the third time I kind of hurried through it.

It’s a discipline and sometimes as with them all it is harder to accomplish but one persists. In lean times and fat times the beat goes on. I like to think that folks always visualize Phil’s Camino as an active process. It goes on no matter what.

The other day one of the pilgrims that was with me was talking about a friend of his that had some serious malady and was out washing his car “because he can”. In other words whether it needed it or not was irrelevant and any other reason or motivation was secondary to his belief that he wanted to do it because he still could or “because he (still) can”.

It maybe is part of my motivation with this my backyard walk. It certainly colored my pilgrimage to Santiago four years ago. It is a sort of Don Quixote thing. We just keep getting it done no matter how crazy things get.

So yesterday, back to yesterday, I came in after the walk and had tapas with My Rebecca. Sometimes in winter with no one walking with me tapas get skipped but this time I felt strongly about it. It was as I thought about it was hospitality toward myself. See that? Maybe I deserve that?

8 thoughts on “Tapas Just Because We Can”