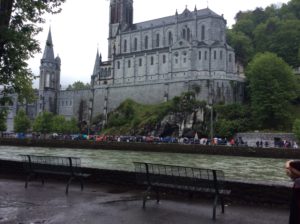 Along the river. The Grotto is there where all those pilgrims are standing below the church.

There is an underground church here that holds twenty five thousand pilgrims.  This is where the whole shebang of the Order of Malta went to Mass this morning.  It was a service open to anyone but by the dress I would say that it was ninety percent people of the world wide order.  They all have a sort of uniform that varies slightly country by country and then everyone has a dress up robe that is the same everywhere and was designed before the 1500’s I think.

Anyway, Communion was served to all those people in this giant space.  Twenty five thousand took Communion!  The numbers here are truly mind boggling.  Lourdes is the second most visited city in France after Paris, speaking of numbers.

This afternoon we had a closed session meeting for all the fifty malades that are in our group from Western US.  It was two and a half hours of malades talking of there personal journeys.  All pretty heavy duty.  Have to mention that one of the basic qualities of the people they choose to go as a malade on this pilgrimage was “ having a life changing illness.”  Yes, I can relate to that.

Tonight there was an international party and I went to that with some of the folks here at the hotel.  It had all the countries there.  It was packed with foreign knights and dames and had more wine than you could keep up with.

So yea, I survived another day of festivities and worship.  Tomorrow we are off on a bus trip up into the Pyrenees.  It is beautiful looking up there with all the snow.

Thanks for being here with me.  Love, Felipe.

« Got A Medal
Monday Morning »

4 thoughts on “Sunday At Lourdes”