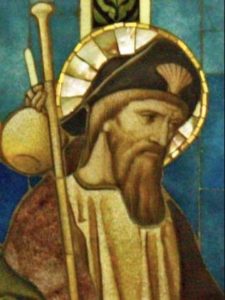 Diego, a  sturdy Caminohead from Lake Arrowhead, CA sent a vital idea in to us this morning in the comments:

“¡Hola Felipe!
Three years ago I walked the Portuguese Way of Saint James.  At the end of one of the next to last stages, in the town of Padrón  I visited a very small chapel, up on a hill, built in the year 40 by none other than our Saint James! To this day I am haunted by my own imagination of what it must’ve been like to bring the Gospel and the Way of his friend Jesus to the Iberian Peninsula…and that place in particular.  What a blessing he was to those people then and today. Beautiful and graceful things happen during and after the Way.  So, on my feast day I was given a Camino Rosary by one of my best peregrina  friends who just completed her second Camino. Saint James is alive and well these days and we know him through each other!
A todos nosotros los Caminoheads….
¡Sigamos el Buen Camino!
Su Peregrino Compañero Diego”

OK, there is the whole thing.  How can we go wrong with contributions like that.  Thank you Diego, put so well.  And I just sat down to do the post today with no idea about what or how or anything and this arrives.  See, writing a blog just isn’t that hard when you have prompts like this.

I love the idea of the chapel built by SJ.  I had never heard of that before.  Not that that means anything.  As far as I know none of this is mentioned in the Bible, that SJ had this  foray into the Iberian Peninsula much less building structures.  Me hanging out with my Protestant Bible Guys concentrate on what “is actually in the Bible”.  But there is a gap in time between Christ’s command to his apostles to go out into the world and SJ’s demise in Jerusalem, a pregnant blank spot.

But really the best thing to me here this morning in Diego’s comment is, “ Saint James is alive and well these days and we know him through each other! “  That is so intimate and fitting here at Caminoheads.  I have never thought of it is that particular way before.  That certainly fits.  Thanks Diego.  Saint James loves, Felipe.