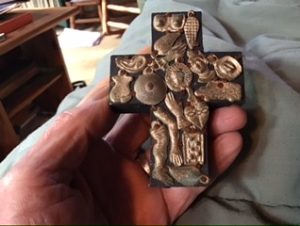 This Mexican cross a gift from Catherine. My sore arm is on there somewhere.
(photo P Volker)

Just whining about my vaccination wound. It’s not quite bad enough not to go to work though. Have to suck it up.

Yea, so the actually vaccination procedure was overall pretty painless. The local pharmacy teamed up with the local emergency preparedness group to put together a drive by situation that worked. No muss, no fuss. So My Rebecca and I are pretty happy with our selves that we navigated through that whole obstacle course.

There was a great story on FaceBook and the news lately out of Oregon. A group of medical folks were off manning a remote vaccination site. A snow storm started coming in and everyone had to pack up early and get hauling. The caravan of cars got stuck behind a jack knifed semi truck on a snowy road as they traveled toward home. The deal was they were carrying extra doses that were going to go bad. So they were out in the falling snow administering shots to stranded motorists til they ran out. And they had everything they needed along to make the whole deal kosher, in terms of personnel and record keeping. This was very cool.

ok, working on making it all kosher loves, Felipé.