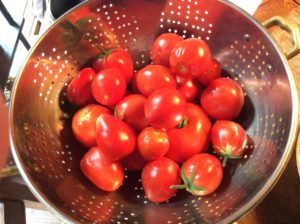 Just because… (photo by Phil Volker)

Back from my men’s group, you know the Bible Guys. It was fun and rewarding. But right now I am home up stairs hiding out waiting for My Rebecca’s book group to finish up who are camped out in our living room. They are laughing and generally having a great time down there. Just one of My Rebecca’s groups along with two choirs and two for writers. This is what we are doing these days.

I was lucky enough to have talked a new friend into going with me to Bible Guys this morning. Several weeks ago in class we were talking about how the Gospel was spread in the first place. Ethiopia came up and we had to admit that we knew little about this corner of Africa. And as luck would have it I have been working with Bob for a year now and he was born there and is current and talkative on events and on history of the place. So, perfect fit.

Something was sticking in my mind through all this and I was going to run it by you. When telling Bob about this group that I was hoping he would come to I said that we were doing something more basic than religion. Don’t really know where that came from, just popped out Holy Spirit style. Bob had expressed to me that he was skeptical of religion if I may put words in his mouth. That is a rough paraphrase. I can appreciate that in terms of honestly and in terms of position. Religion in general has a lot of apologizing and penance to do.

So, in our class it has always been an unwritten rule to leave as much of our personal baggage at the door as possible. This is political stuff, class stuff, regional stuff and yes, religious stuff. Well, let’s see, are there other stuffs? There is philosophical stuff as is this piece that we are reading to be taken literally or symbolically. Well obviously it is impossible to cleanse our discussion one hundred percent of all this, nor would you want to. We are humans for pete sake, not celestial beings.

But I think that reading the Bible to just see what it has to say, first and foremost, is more than half the program. And well worth the price of admission I might add. Of course one needs a certain amount of perspective to gain any meaning but keeping that as honest as possible is important. Well, there it has been said.

But I think pilgrimage is more basic than religion also. It begs to be participated in by such a broad spectrum of folks from backgrounds hither and yon. There is more to explore here but my Saturday beckons.

« Kisses And Cooties I Have Known
Sunday, Sunday. »

4 thoughts on “So Much Study”