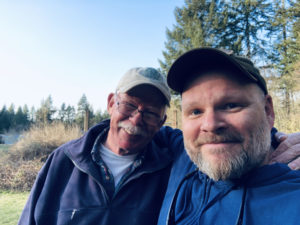 Perhaps the soul is the energy, the body the vessel. It does make sense. Perhaps life is short and we only get one chance. That also makes sense. Then what then..when the body is gone and the soul floats? How long does it float? You know, floats amongst us, the energy..you know what I mean.

I went for a walk not too long ago. I had a walking stick, the one I got in a shop in Spain….forgot the town, good town after you see David at the top of the hill, the guy with the fruit stand that seems to live there….”Donativo”…you know the guy if you have been there….Kind of like, you know the guy named Victor who walks with his horses as you ride them up the hill to O’ Cebreiro….(probably misspelled but if you were there, you know what I mean)

OK, Back to the walk…

So as I was walking down the nice paved road that runs along Liberty Bay in my beloved Poulsbo, WA, I had a feeling, a day-dream of sorts. It was the same sort of day-dream I had when I left Burgos, Spain and started walking through the expanse of fields where it starts to get a bit windy and cool, even in HOT July, again, you know where I am talking if you have been there…

The day-dream thought I had while walking in both places was that I imagined many souls around me. There is a scene in “Forrest Gump” where he is running through a desert road and there are many people behind him, following him on his road, you know the part where he turns around and says, “I’m kind of tired now. I think I’ll go home now..” You know the scene if you’ve seen the movie, and I know, you’ve seen the movie…Well, as I walk there is a sense of people walking with me, to my sides, right behind. I am not alone. They are talking in my mind. They are happy. They look good. They all have the same thing in common. Me. There are many people there with me on my walks. My Grandfather Richard Hull…My Great Uncle Larry, (the pen-pal I actually never met), a childhood friend named Eddie Travis, my Grandmother Beverly Hull who loved to walk, three of my dogs, Bo, Bo II and Annabelle, there are many others as well. Now, the people there walking with me, they grow in numbers from time to time, and as I get older, the numbers grow. The last addition to the crowd of folks I walk with is named Phil. Phil walks next to my Grandpa, they are for sure buds, and they chat about the same stuff. The voices of these people are in my head, my mind as I walk. The ones that meant the most to me in my life are on the walk with me. They were there with me in Spain in 2017, that is when I first noticed them. In fact, I swore I saw Eddie in a field as I was entering the last stages of the Camino, I heard his laugh.

I remember hearing that Phil wrote in his walking log that even when he walked and no one was there, he didn’t walk alone. I am not for certain, but I have an inkling that Phil also had a crowd of folks walking alongside and behind him, walking with him around Raven Ranch.

Well, Phil, my brother, you are now a part of my tribe, walking with me when I walk as well.

I miss you all. I hope we all get together soon and have a big “Phil-Fest”:)