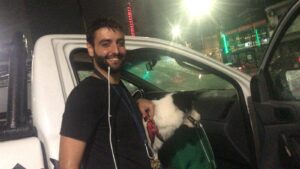 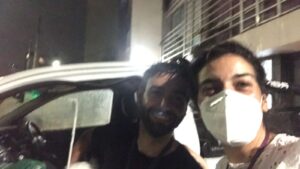 In Spanish, we have a saying that is “El hombre propone y Dios dispone”, sort of like we can have all the plans we want, but at the end of the day, God/destiny/luck/etc. decides what happens. Today’s post is one of those, I was planning to elaborate an email on the topic we are discussing, but then, my bell rang and this is the post…

So, I had opened a bottle of cider, and was facetiming with my clay-brother, having a great time, and my bell from downstairs ran a few times. I asked who was it, and nothing. I came back to the computer, and it ran again, and I hear my neighbor from the 8th floor (who is actually one of my friends) crying and saying he was desperate. I ran downstairs thinking he had been robbed, or something like that, but no, what happened is that was packing his truck because he was going to work in the country side tomorrow, Vera, his dog was with him, and he forgot something in the apartment and came inside the building when he realized he left the truck keys over the seat, as he was putting Vera’s safety belt. And yes, the truck locked. And he had no other key. And it is pouring rain outside, and the person who might come, could only came 3 hours later and this couldn’t wait.

So, an operation started. We un-done some metal hangers that I had at home (those you get when you send things to the laundry), a screw-diver, and with the instructions of another neighbor in the phone, we managed to open the car after an hour of attempts.

The whole story is way funnier, i may tell about this later, but now, I leave you with a picture!