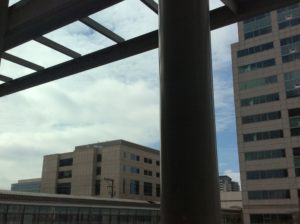 Blue sky in our future.

I’m at the treatment center in the comfy chair for a couple of hours.  Got a seat with a view of downtown Seattle.  It would be kind of fun to know the names of all those buildings.  They weren’t even there when I first got here in the early Seventies.  The tallest building then was the Smith Tower which was the tallest west of the Mississippi for a while.  Now it is dwarfed by the old march of time.

Yea, the dream.  Remember last month I had the Disfigured Muse dream.  She had such a powerful spirit that it outshines her “problem”.   I’m still high on that one.  Now last night or probably early this morning I had this little short dream that My Rebecca had died.  The climax was that I was getting her body ready for burial and I felt the inside of her right knee and it was warm.  Why would that be?   And then she was alive and back to us, yea.  That was it, really so short, so understated.

She has always been fancinated by the near death experience.  She reads books about it. Or books about the stories of people who have experienced heaven and somehow have returned to us here.  So apropos that she would do this in my dream.  But it sounds like something is dying and rising again in me would be my shoot from the hip interpretation of that.

Oh, it is brightening up outside.  The barometer is way up and the afternoon may be beautiful.  We need that.  Maybe it will carry into the weekend.

Well, the big Gonzaga college basketball game is tomorrow afternoon.  We’ll be over at Kelly’s to keep him company with his favorite team playing.  Rick’s coming, maybe others.  Looks like a get together to me, possible shindig.

« Thursday Thursday
Falling Off Our Horse »