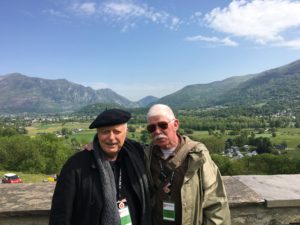 In 2018, we visited a fourth century monastery near Lourdes.

We all know him as the Padre. Actually to be totally correct he is the Desert Padre. He now hails from the desert country of California although he has been on the road or at sea most of his adult life.

The Padre served as a US Navy Chaplain for many years, that’s the at sea part. We got to know him through Annie and the Phil’s Camino Documentary where he served as our spiritual advisor. We already had a lot of spirit but what we needed was occasional guidance which the Padre provided.

The Padre came to Raven Ranch for several days a few winters ago. I felt so honored. Where 1200 Marines have to share him, this Marine had him all for himself. It was very rainy as I remember and we talked and talked.

Our last adventure took us to Lourdes, France with the Order of Malta. I went as the malade (a person with a malady) and Padre went as my helper. Us maladies all needed helpers or care persons. The Malta folks said, “You have a priest as your helper?” I said, “Yea, I need a lot of help!” Well who was helping who, I’m not sure but we had a great time. We might have been a bit much for them as I wasn’t your garden variety malade and Padre is a stand out as always.

Padre is a Paulist Father which is a fairly new order. Paulists specialize in media to get the word out. So it is fitting that I got to know him through our documentary. And below is a link that he just sent me about himself.

Padre Tomas Explains It All

Well that was fun. You can tell I love this guy. Hope that you get to meet him at some point.

« A Friend Named Janet
Wind From The North »

8 thoughts on “My Friend, The Padre”