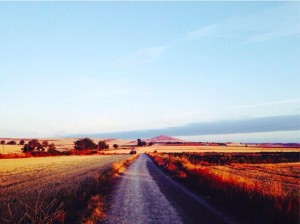 Morning along the Camino in August 2014. And on through Dubuque in April 2016. Who would have thought that we would make it this far?

People read this blog from all over the world and sometimes they may not be all that familiar with US geography, understandable.  There is always confusion about the two Washingtons, one on each coast.  What were we thinking?  But back to Iowa.  This state is located in the middle of the country, it’s eastern border the Mississippi River.  The Mississippi flows south and eventually goes through The city of New Orleans and empties into the Gulf of Mexico.  So in early US history before roads these waterways were the highways and adventurous folks traveled them in canoes, small and large.  And this is how Julien Dubuque made it to what is now the city of Dubuque in eastern Iowa.

The metal lead is what interested him in the area and he started the mining and refining of lead there.  And Dubuque is noted as the first American city west of the Mississippi and the first city in Iowa.

The Dubuque area is known for it’s energy due to the presence of ley lines that run through the location.  Ley lines are mysterious lines of energy that define certain spots on the earth in terms of their energy.  I wish I could say more on that but am new to the term and the knowledge.  Google it I guess.

So, ran into amazing people there and they will pop up here I am sure as the days go by.  Yea, and Phil’s Camino went there and was received well.  Maybe we recognized each other’s energy?  Hate to get too whoo whoo here but can’t help it.

The movie has a way of connecting people to the real feelings and turmoil of the cancer experience.  It may dredge up memories of hard past experience in there own lives.  It’s useful in that way.  And it gives a glimpse of hope for positive outcomes.  It shows a pathway, a Camino.

And that Camino just went through Dubuque, Iowa.  As Annie always reminds me, “We can’t help ourselves!”.   It’s a scary and comforting zone to be in.