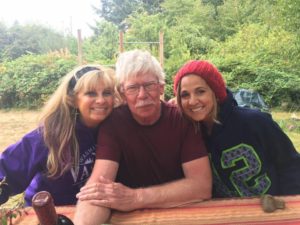 Sue and Mercedes at Phil’s Camino recently. Our job is to see each other as we are.

I am crafting two posts today. The one about the film I just finished. But I also wanted to get back to continue the thread that we had going yesterday. That all started with Terry’s blog post on Sabbath Moments. At one point he was talking people with dementia and their battle. How there are “culture driven presumptions” that imprison them beside the disease that also imprisons.

Maybe I don’t write about it often enough but the battle against cancer is almost always on my mind. Dealing with the disease itself is hard, if that weren’t enough. But what I became aware of at some point was the other battle against the fear of the disease which seems in some ways to be worse than the disease itself. That fear can be a highly personal thing but it is also a collective cultural thing that influences thinking on a big scale.

The concept of cancer hangs in our collective consciousness like some giant monolithic boogie man. When I or anyone gets branded with the cancer brand that descends on us to cloud the view of everyone of us. We are seen through the lens of “too bad”. It so complicates things. We have to fight for our individuality, our particular song on n all this. We are not our disease!

The presumptions go on an and on. Even people I know well get caught up in this and don’t really see me. But these presumptions can be even more dangerous if I would start mirroring them as my reality. Instead of taking a really close look at my situation as it exists for me if I accept what it is I am “supposed” to see.

Ah, books have been written on this I am sure and I am out of time for now. Have to go to work. Thanks for taking the time to be with me. Love, Felipe.

« Our Very Own Magical Mystery Tour!
…and fishing lure designer. »

2 thoughts on “More About Cancer”