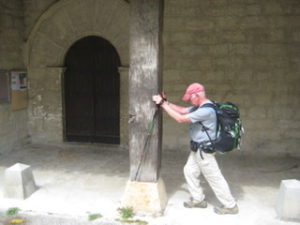 I was more than tickled by all the surprises. One of the best which happened over and over again due to the nature of the flow of pilgrims was to catch a glimpse or suddenly be in the presence of someone that you knew from earlier on the trail. To renew a friendship was always fun. People were always coming and going in the flow. Some decided to stay in a certain place to explore or some would have to heal up for a few days. But then later they would catch up because you slowed down for some reason. Reunions were fun!

Then there were all the religious and spiritual reminders along the trail. From grand cathedrals down to little crosses or piles of stones
made by those that had been there before. There were the carved stone crucifixes that were every so often that were centuries old and the funky crosses made of two sticks and lashed together with some fiber at hand. I remember Kelly my walking partner would get on me for repairing these humble gestures when they fell apart. Then he was so moved by that place where there is a half a mile of chain link fence paralleling a highway that was covered with thousands of pilgrim crosses woven in to it. The crosses where mostly made of sticks but some were artistically crafted of windshield wipers and other automotive debris. We made crosses but I remember having to climb up the adjacent hill to the woods to find some material because everything close by use used up. Kelly was very moved by all that.

And it seemed like God was prodding and poking us the whole walk with those type of artifacts. People there before us had created so many and they included all kinds of hearts laid out in stones and all manner of things. A huge map of the world done in old tires was spread out on one hillside. All this continuously reminded us of the purpose of the walk.

Speaking of walking, it is walking time here. And bird feeding time.

Love You spelled out in old tires on a hillside loves, Felipé!