As I thought about yesterday’s post I wished that I would have said a few more things. But that is how the blog goes. It unfolds over time. One post never reinvents the wheel. 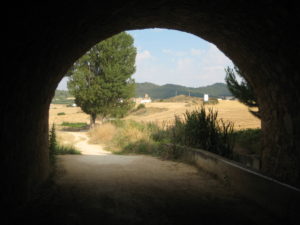 This is a pic taken by Kelly my beloved pilgrimage partner in Spain. It is my favorite maybe because it sees the landscape from the view point of the “inner” pilgrim. Thanks Kelly.

We have snow in the forecast this morning so I am keeping one eyeball on the window to try and catch the first flake. The woodstove is burning away trying to warm the place up. A lot of the wood that I am burning now is the firewood recovered from that big snowstorm last February. It did a lot of damage and I still am cleaning up from it. We shall see what the day brings.

But back to yesterday’s topic. The braiding of the three lifelines was where we were. So thinking about it I wanted to explain the third one better. I think that I had said that the Camino was now my job. And I think that is how Sister Joyce first said it although she went on to explain it better and I may have been out of time yesterday to get there.

One way to think about it is that the Camino represented a focus for me at that time when most of my being was in turmoil. It gave me something to do, to cling to, to work on when things for me were in cancer chaos (new term). It gave me the opportunity and excuse to exercise which proved very important. It represented something that I was involved in that was bigger than myself. The Camino got me outside myself and my worries. It also represents a gift that I am giving to those around me. So, saying that it was now my job needed to be explained and amplified.

Well, and there may be more lifelines to add to the braid. There are braids with more than three parts. There are all those factors that were discovered by Dr Kelly Turner in her book Radical Remission for instance. So, this is all still a work in progress.

Walking in a few minutes. I’ll get bundled up and get out there. Maybe I won’t do the usual three laps, see how I feel.