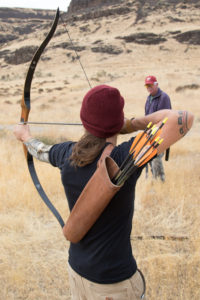 Wiley and Dad a few days ago.

It was hard work over the last four months of the harder stuff chemo. I lost ten pounds in the process. We gave that drug a good try but it didn’t do anything really according to the scan. So, we are off to the next hard drug in a while. I am doing some lighter weight stuff for a few times till I regain my weight and then hit it with that new harder stuff. Oh bother!

At home on Vashon tonight James is going to fix the gamebirds that we brought back from eastern Washington. Yea, the chukar partridge. The best way we have found to cook birds is to skin them, part them out, wrap in bacon and fry.

So Cris will be here in the middle of all that. Sounds like fun to me. Now to just make it through a few more hours of treatment.

« Back From My Scan
Before First Light »

6 thoughts on “It Was Hard Work”