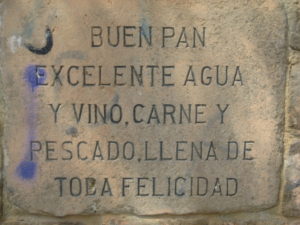 Photographed in Spain and timely for our dinner party tonight.

Man, I just got sucked into FaceBook so bad.  Yike.  I should know better, right?  I used to not read anything before I did this blog which is a good thing.    If I start reading other people’s blogs and all the FB posts then I get lost in that.  But here I am now!

My Rebecca is throwing a dinner party tonight so she will be scurrying around here like crazy soon.  I’ll get outside to work on the firewood cutting hopefully.  It is raining now but it will stop soon according to the forecast.

So yesterday afternoon had a long Face Time with Cris from Buenos Aires.   She is an active Catholic, walked the Camino twice and works in cancer research.  That matches up with my 3 C’s so we had a lot to cover.  We as North Americans know so little about South America and it’s people.  Well, I guess we were trying to work on solving that.

She has some great stories of Pope Francis when he was the Bishop of Buenos Aires.   The main cathedral is right near where she worked so she would bump into him there.  He had a program of gathering blankets, clothing and supplies for the homeless and she would help with that after work.  Hangin with the Pope.  I’m FaceBook friends with him but that is not quite the same I guess.

So we are working on the second half of Lent now.  There was some indication at church last Sunday that we were half way.  So we need to continue with our intentions and not let them get drowned out by the world.  Maybe a little less FB and a little more Lent would be helpful and healthy.

Yea, off to my day.   There is a great old joke about Oly and his new chainsaw but it will have to wait for tomorrow.  Alperfect here in the rain, spring loves, Felipe.