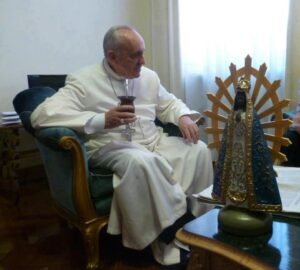 Pope Francis, mate in hand, and the image of Virgen de Luján (Patron of Argentina) – Pic from internet; author not quoted

“Have you met Pope Francis?”; “What is <that thing> he drinks?” (it was our “mate”!)  Funny enough, those were the first two things that Phil asked me when we exchanged our first email. He asked me about the Camino afterwards! Phil was fascinated by Pope Francis and I happened to say I was Argentinian… That is how all this started…

Below is what Phil wrote on 26Oct2017… I have enjoyed reading it! Hope you too!

By the way, in my visit, I took Phil and Rebecca some -hands- soap made with “yerba mate”; Phil loved them…!

Cris is here, sleeping off some of the travel wearies. She got here just in time for a big dinner last night with Wiley, Henna and James. They prepared the chukar partridge that we had brought home from the hunt. And then there was the second game of the Series on the tube, what a nail biter. So a party evening.

A good connection was made between Cris and James. He is working aboard a National Geographic ship that takes passengers on eco travel trips. He is on their dive team that takes folks on dives in these exotic places. He has been with them to Patagonia before and is heading down again soon so they were both talking Argentina. How fun!

Yesterday was complete with some great ups and downs. So glad that I have had all that inspiration about the North Star lately and keeping a steady focus there. Otherwise my life would be way too much of a roller coaster.

Having so much fun reading Pigrimage by Schriver about Pope Francis. Cris jumped right on it as she had never seen it before. The first part of the book has a lot about Buenos Aires and how the Church, geography and Argentine politics had a lot to do with his early formation. And now I am off to the second part about Jesuit training that was so influential. I have a new respect for priests that have been through all that, wow.

We have a walk this morning and I think that Catherine and Dana will be here. Then we have an invite to their place tonight for dinner. It is a place where hospitality abounds, so looking forward to that. Cris will love it. But inbetween I have some projects for us to work on planting a cover crop in the corn field and getting in five lavender plants along both along Phil’s Camino.

So, getting ready to make breakfast and get this show on the road. Getting light out and I can see it is overcast but that is supposed to burn off. Another day in God’s playpen! Love as always, Felipe.

9 thoughts on ““Have you met Pope Francis?”, was Phil’s question…”