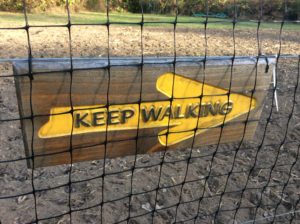 Here at Caminoheads we are close to fifteen hundred posts written in the last coming up on four years. And I am thankful for the practice that it has given me to improve my writing and communications skills. It has been a long enjoyable road.

I was just writing Cris our Bureau Chief for things South American and I was saying that I had hoped her business trip to Toronto was successful. Then I scratched the word successful and substituted fruitful. They sort of mean the same but fruitful has juice, has a sensory component that adds. This is the kind of fine tuning that I enjoy now as I write.

The story of the Choctaw women that we have been here for days now is loaded with sensory delicacies. The smell of manure and death is strong in our nostrils. But the promise of ripe juicy tomatoes and flavorful peppers is there also. God ties those two together for us but we need to play our part.

A memory lingers from a bible class session that fits in here. And I don’t remember what book we were in but it was a story about Jesus teaching the Apostles and them later thinking on his words. The text had the word “thinking” or “contemplating” maybe. But the Greek word from the original text translated to “gnawed”. They gnawed on Jesus’ words!

Not a bad way to think about things as we are still under the spell of the garden story. We need to gnaw on it and try to internalize it as much as possible. Maybe the whole fruitful universe is in there for us.

« Jolt Of Clarity
For The Birds »

2 thoughts on “Fruitful Is Better Than Successful”