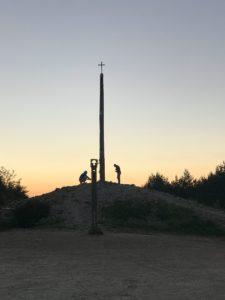 Today is the second line of the blessing that Ronaldo received before setting off to the Camino. This one, I must say, is one that touches me very closely and very deeply.

May God bless you with anger at injustice, oppression and exploitation of people

so that you will fill your heart with the desire for justice, equality and peace.

The reasons for that are many. I am pretty sure the fact that I am from what has been defined as a “Third World Country”, in a region as Latin America that has been known for being in disadvantage and where injustice is something that particularly those in disadvantage accept as a condition they will be fighting against always, with years and years of dictatorships and oppression, and unfortunately too, exploit by those who somehow help us…

At the same time, as it happens too in countries where the reality of the daily life is like this, many of us grow up and mature with a need to stand for what is right, for what is true, for justice, for equality, for peace… just as the blessing Ron received. Some of us have romanticized this fight mostly in our young adult years but many remain committed through activism even if understood that the young adult dreams were too pretentious…

If I speak for myself, when I was very young, in my early teenager years (when there was no internet), I got to read in a newspaper  about the “United Nations”, at that time, the secretary general was a Peruvian diplomat, Javier Pérez de Cuéllar, and although I had no clue what that meant, it remained in my mind… almost at the same time, there was a concert in Argentina called “Human Rights Now” organized by Amnesty International, and that was the kick off for me to learn about the apartheid in South Africa, the  “reconciliation process” Argentina went through, “the troubles” in Ireland. And I started to dream about being a diplomat sitting in a chair in the UN! With the years, I got to learn about Mandela, Adolfo Perez Esquivel, Mary Robinson, Desmond Tutu, Kofi Annan,… I also listened to my biological father talk about the war in the Yugoslavia, the balkans, the conflicts in Gaza, and obviously the Malvinas/Falklands war… (And I had to make a decision for University and I went for science…)

But the awareness of this larger, diverse, and conflicted world has remained, it is still with me, it still angers me and it is what has always moved me not to take away my eyes from injustice… Clearly the world has changed but sadly the gap around injustice is wider and wider… sometimes I think it is because we are so busy that we don’t look at the sides to see what the others are experiencing… So yes, this second line truly makes sense to me.

Striving for justice and peace Loves,

One thought on “Flaking the blessing II”