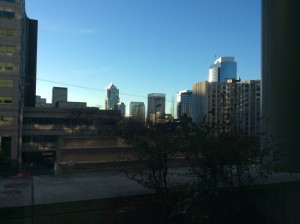 Sun’s out in Seattle!

It’s a she and she is in a little patch of bamboo in a planter outside the window here at the hospital. Hummingbirds shouldn’t be here this time of year but people feed them and they figure out how to get through the cold weather somehow. It’s a gorgeous day today which means that it is cold. Cold and dry or warm and wet is the drill for Seattle. She is neverously fliting from one perch to another. Hummingbirds are pretty nervous and this may be just her version of rest or my theory is that she sees her reflection in the window and it is making her agitated. She sees a rival.

She sat on the same branch for three minutes, an eternity, but is off again. Even while she is sitting in the same place she is constantly dinking with the leaves around her. What a nervous creature.

The sun is starting to go down and it is 3 o’clock in the afternoon. The day’s are getting longer supposedly but hard to see yet. It Is pretty right now ou the window to the west and will take a pic unless I can get a shot of Queenie. I named her.

New Years coming and it is hard to imagine a better year than 2014 but heck lets go for even better. What do you say? Alperfect, Felipe.

« Walking And Talking With Maryka
More About A Fat Little Hummingbird »