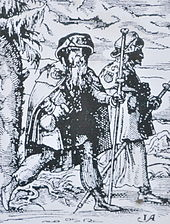 Long before I became a Pilgrim on the Way of St. James, I had been a fan of “things that last”, be it a well-made tool or a well-used book, or a prayer that had provided succor and hope for generations. This penchant for the permanent was probably, yet unknowingly a driving force behind my immediate recognition that this journey was something I HAD to do.

My early conversion to fan-hood of Phil’s Caminoheads Blog has led to other like-minded Blogsters (Google thinks I made that word up. Maybe I did). Phil’s Blog is perhaps the epitome of “Long Lasting”. There are others that have attracted my attention and won my loyalty. Paul Salopek, for instance, is on a multi-year walk around the world, and writes a splendid blog called “Out of Eden”. He is now in his third year of trekking. He is following what is thought to be the migration route of all of us humans from the beginnings in Africa. His skill at writing of these all-encompassing experiences is superlative.

Phil Jenkins has walked to all 88 Temples of the Shikoku Pilgrimage in Japan. His journey has also lasted for ages and his photos are wonderful!

And a free spirit and intrepid sojourner from the last century could put me and most other infrequent long-distance walkers to shame, though from her writings, it is clear that she never would do that. She started walking in earnest while yet in her teens, and had walked much of Europe by the time she was twenty. The Orient was her true fascination, and she spent may years walking in Tibet. Her legacy is long, and she lived to be 101. There’s that “things that last” again. The following is a quote from one of her several books.

“I climbed barren mountain-tops. Long tramps led me to desolate valleys studded with translucent lakes … Solitude, solitude! … Mind and senses develop their sensibility in this contemplative life made up of continual observations and reflections. Does one become a visionary or, rather, is it not that one has been blind until then?” Alexandra David-Neel.

The point I make today in my Stand-In-for-Phil-Blog-Rotation is that this preoccupation of ours with “our” Camino creates the ultimate ripple effect with all those others of our ilk. It’s like, ya know, we’re connected.