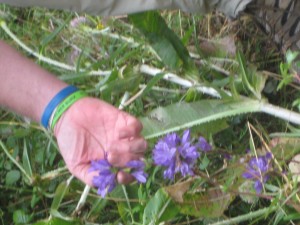 Wildflower along the Camino in Spain.

I want to give you some very very encouraging news in from Annie the Director/Producer of Phil’s Camino. We have been working on this project for roughly a year and a half now and things are coming together sufficiently to have something to show folks. So, Annie had a screening of the film last Sunday in LA sharing it with a select audience to gather important feed back.

Here are some comments from the viewers:

“A must see. Soulful and moving”
“This film has so much meaning. It takes courage to live full out as Phil does; and it takes courage and skill to make a film that rings true. This one does!”
“It was wonderful”
“Magnificent — it’s sitting inside my heart”
“Moving…touching…transformative”
“Beautifully filmed”

Nice, right? These are very encouraging comments obviously. This is what we live for, to make some, difference. We’ve all had our noses so close to the grindstone that it is a breath of fresh air to see this kind of reaction from viewers outside the old smoke filled room. Yea.

Here is what Annie said in conclusion to her update:

“Anyway, Felipe, this is most definitely the little film about a big dream that is very close to being done. St. James is working hard as our Executive Producer and the crooked places are being made straight.”

Well that is the way it is at the moment, love you, Felipe.

p.s. – let us all be “sitting inside” each other’s hearts always.