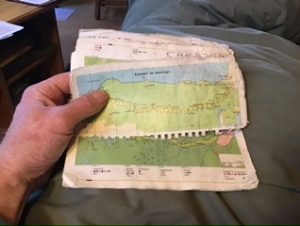 My poor Camino map that I carried and then Catherine carried across.
(photo P Volker)

Just when you thought you were safe, crocodiles show up. It’s all William’s fault really. He wrote a comment about yesterday’s post and that’s where it started. My post said that I would see heart rocks on the Camino when I really needed some inspiration. And William commented that that was just for me as in I was the one that saw them. Maybe someone else didn’t see them but was inspired by something else. OK, got it. But then he starts writing about the pic on yesterday’s post has a crocodile on it and it is going to chomp down on my thumb! What?

And I look and there it is. Can you see it? I thought I was looking at a map of the Camino. But for William it morphs into a reptile and it’s open mouth is by my thumb as I hold up the “map”. So, William proves his point. We very personally see what we see.

Which brings up a technical point. If you get this daily post on your email I don’t think you get the daily pics. If you connect by going directly to the www.caminoheads.com website you will get the pics which I think adds to the post. So, you have to maybe get to the website to see the crocodile.

On the map a yellow line is the Camino from Astorga to Santiago and it forms the top edge of the open of the crocodile. Teeth seem to hang downward and are numbers that mark the daily stages. The lower edge of the mouth is a line formed by the words Ourense and Ponferrada. The pièce de resistance is the eye formed by the city of Oviedo. And there it is for William to see.

Time to go. Have a walk this afternoon. I haven’t been all the way around it since the snow fell. Maybe I will make it today.